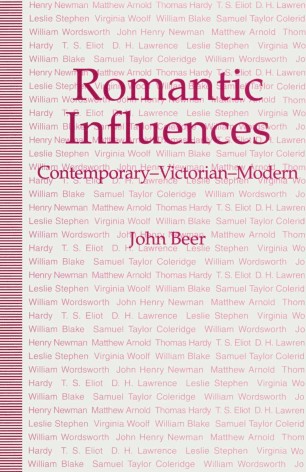 '... a significant, wide-ranging study ... Above all, the book restores a salutary sense of the value of, and the difficult poise involved in, creative acts.' - Michael O'Neill, Durham University Taken together, these interlinked studies on topics such as the literary influences at work in the 1790s, Newman's resistance to Romantic ideas, the exact nature of Virginia Woolf's debt to Walter Pater and the counter-Romanticism of Lawrence and Eliot constitute a large reading of Romanticism from 1789 to our own day. They also throw light on the complex workings of influence itself, not least by showing how writers used images of fluency to describe their own creative processes.

John Beer is Emeritus Professor of English Literature, University of Cambridge and Fellow of Peterhouse. His work on Romanticism includes Coleridge the Visionary, Coleridge's Poetic Intelligence, Blake's Humanism, Blake's Visionary Universe, Wordsworth and the Human Heart, Wordsworth in Time, Questioning Romanticism (ed.), Romantic Influences and Providence and Love. He has edited Coleridge's Poems for Everyman's Library, his Aids to Reflection for the Collected Works and is General Editor of the series Coleridge's Writings.