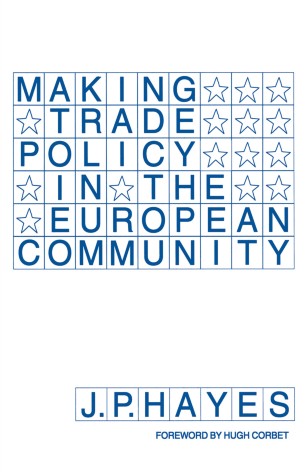 'Commentators often see wide differences between policy as they consider how it should be conducted and how it actually emerges. Those who are involved in making trade policy, for their part, commonly accuse commentators of 'not living in the real world'. There is often a dialogue of the deaf. Part of Mr. Hayes' object has been to try to build bridges between practitioners and commentators, with suggestions for ways of improving the policy-making process in the future.'Hugh Corbet, Consultant, Trade Policy Research Centre, London. The external trade policies of the European Community are of great importance, both for its own people and for trading partners in the remainder of the world. Yet the processes by which the European Community of twelve countries attempts to reach agreement have remained somewhat mysterious. What has been the relative influence of principles of policy and of various political, bureaucratic and private interests, at both the Community and the national levels? This volume is based on a number of case-studies, and also contains chapters on the formation of attitudes to trade policy in three of the largest countries of the Community, Germany, France and the United Kingdom.