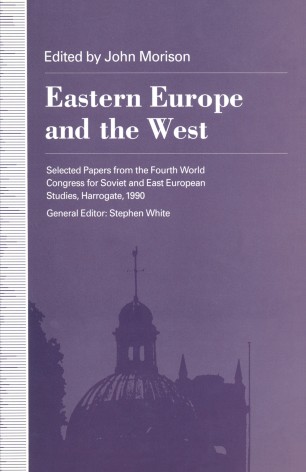 Eastern Europe and the West

This book explores the rich and complex relationship between Eastern Europe and the West in the nineteenth and twentieth centuries. Hans Henning Hahn, Robert Berry and Frank Thackeray elucidate Polish emigre diplomacy in the Partition years. Thomas Sakmyster reveals the British contribution to the establishment of the Horthy regime in Hungary. Peter Pastor chronicles the fate of the Hungarian community in wartime Britain, and Gyula Juhasz and Peter Hidas investigate the activities of Hungarian diplomats in the Second World War. Bernd Fischer looks at the role of British intelligence in Albania in the Second World War, while Osvaldo Croci investigates the diplomatic return of Trieste to Italy in 1953. Lech Trzeciakowski, John Kulczycki and Adam Walaszek discuss the experiences of Polish miners in Germany, German settlers in Poland and Polish returnees from the USA. Robert Blobaum reinterprets the Polish Marxists' policy towards the Polish question, and Richard Lewis reviews the fate of Polish historians under Marxism. Alan Foster analyzes the sympathy of The Times and the Beaverbrook Press for the Soviet Union in the interwar period, and Paul Latawski scrutinises the idiosyncratic views of Sir Lewis Namier on Poland and Czechoslovakia.