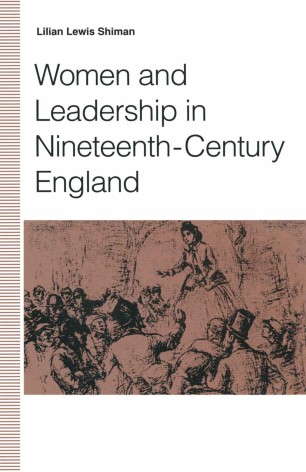 Women and Leadership in Nineteenth-Century England

Part of the Studies in Gender History book series

England in the nineteenth century became a predominantly middle-class society, with new opportunities for men, but new social and economic restrictions on "respectable" women. This book describes the emergence of exceptional women from their assigned domestic sphere to positions of public leadership, and finally to the cause of women's rights. Evangelical women in John Wesley's time preached publicly, but after his death were banished from the pulpits of mainstream Methodism. Other women, particularly Quakers, were soon heard in the anti-slavery movements and other reform causes of the 1820s, 30s, and 40s. In the middle of the century opposition to women entering public life was at its greatest. But some pathfinding women emboldened others by their leadership in the reforming missions and the revival campaigns of the 1850s, 60s, and 70s, especially within the temperance movement. By the last quarter of the century talented women were learning "unwomanly" skills of political leadership, particularly mastery of the public platform. In a succession of national women's organizations they applied the lessons learnt to women's issues, preparing for the final assault on "the key to all reform", women's suffrage. At the century's end the walls that had so long excluded women from public life were beginning to crumble.