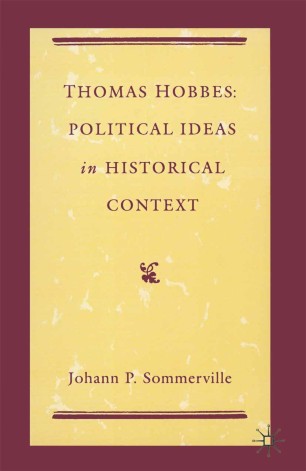 Johann Sommerville's is an impeccable textbook. Simply written, it provides exposition of Hobbes' arguments in the context of English and continental thought'. P. Springborg, University of Sydney, Political Studies, Vol. XL1, No 2 6/93 Thomas Hobbes was probably the greatest of British political theorists. Too often commentators have failed to grasp his meaning because they have ignored the historical context in which he wrote. Drawing on much recent scholarship and on many little-known seventeenth century sources, this book presents a lucid and jargon-free examination of Hobbes' arguments, setting them against a background of the ideas of his contemporaries and of the political events of his lifetime. By viewing Hobbes in his context, the book both clarifies his theories and illuminates European thinking at a critical stage in the development of modern political ideas.

JOHANN P. SOMMERVILLE is Associate Professor of History at the University of Wisconsin-Madison, and a former fellow of St John's College, Cambridge. His previous publications include Politics and Ideology in England, 1603-1640.