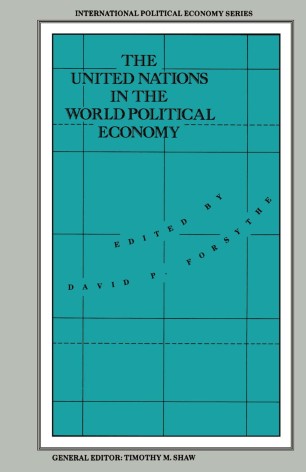 The United Nations in the World Political Economy

Essays in Honour of Leon Gordenker

The United Nations is in a time of major crisis in the history of the organization. The product of many leading scholars on both sides of the Atlantic, this work examines whether out of the crisis of mulitlateralism engulfing the organization in the late 1980s there could arise a renewed and strengthened global body. Pursuing the theme of the dynamics of international cooperation, thirteen authors look at three principal issue-areas: the principal UN organs, leading economic subjects, and leading social subjects. Two distinguished American scholars provide concluding commentaries. Running throughout the book is an emphasis on the economic dimension to international politics.

DAVID P. FORSYTHE is Professor of Political Science at the University of Nebraska. He holds a PhD from Princeton University and won the Dauer Prize with his book Human Rights and US Foreign Policy. He is also the author of Human Rights and World Politics.