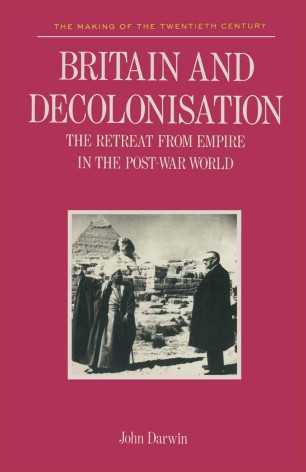 The retreat from empire in the post-war world

In the 25 years after 1945 Britain's worldwide empire fell to piece and Britain ceased to be a great power. Britain abandoned her Indian Empire, gave up her rule over the African and Asian Colonies, surrendered her premier position in the Middle East and withdrew from almost all the bases - like Aden and Singapore - which had once been the 'tollgates and barbicans of empire'. At the same time, she gave up the long tradition of aloofness from Europe and entered the EEC. How did these vast changes in Britain's world position come about? Was Britain driven into imperial retreat by the main force of Afro-Asian nationalism and superpower pressure? Were the colonial transfers of power a noble and timely recognition or the political maturity of the colonial peoples, as Harold Macmillan once claimed? Or had Britain weighed the costs and benefits of empire in an age of rapid economic and international change, and decided that the colonial game was not worth the financial candle? If so, how are the apparent contradictions in British policy to be explained - the dangerous adventure at Suez, the extensive commitments East of Suez not terminated until 1971 and the Falklands war? How far indeed were the British able to control events in their colonial territories? And why did some colonies become independent so much earlier than others?

This book describes the aims and policies which the British tried to pursue in their last imperial age and examines the conflicting explanations put forward for Britain's part in decolonisation - that great reordering of world politics that has taken place since 1945.

JOHN DARWIN was formerly Lecturer in History at the University of Reading and is now Beit Lectuer in the History of the British Commonwealth and Fellow od Nuffield College, Oxford. He is the author of Britain, Egypt and the Middle East (1981).