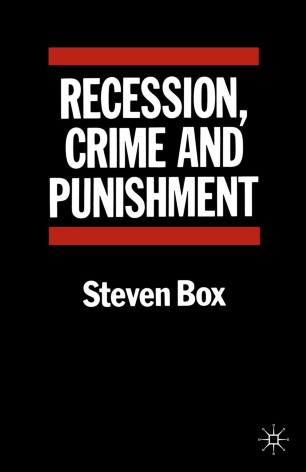 We are often told that unemployment is 'no excuse' for committing crimes. It certainly does not follow, as many in government would have use believe, that crime is unrelated to social conditions.

Examining a mass of evidence from Great Britain, the United States, Canada and other industrialised countries, Steven Box shows how criminal activity increased with unemployment, poverty and sharpened competition between firms. He demonstrates that corporate as well as individual crime is affected by the experience of recession and that changing pressures and opportunities alter the character and distribution of deviance as well as increasing its incidence.

Although deterioration in material circumstances does lead to more crime, however, it does not alone account for the massive increase in prison populations or increasingly repressive systems of social control. These developments, the author argues, flow more from government attempts to restructure the labour force and the natural reaction of minor state officials like judges, police and probation officers to the changing 'logic' of their situations.

STEVEN BOX was sometime Senior Lecturer in Sociology at the University of Kent and is the author of Deviance, Reality and Society and Power, Crime and Mystification.