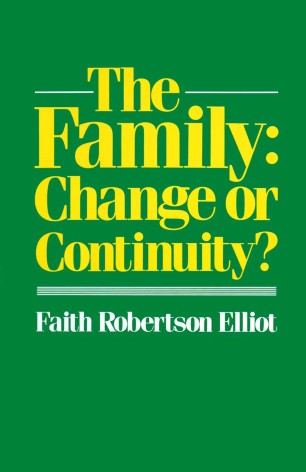 The Family: Change or Continuity?

Faith Elliot's book has a coherence unusual in a textbook. As its title suggests, it directs our attention to change and continuity in the family. It reviews debates about the biological origins of the nuclear family and gender roles, accounts of the development of the conjugal family as the dominant family form in modern Western societies and of change in the roles of men and women within and without the family, the remodelling of the conjugal family consequent on the legitimation of divorce and the emergence of one-parent families and remarriage families, and the development of alternative lifestyles as exemplified in unmarried cohabitation, same-sex pairings and group living. The book considers Marxist and feminist approaches alongside the functional approaches which have been more traditional in the sociological study of the family.