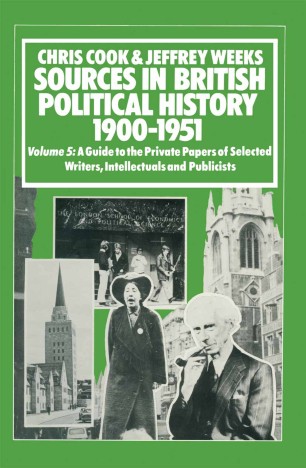 A Guide to the Private Papers of Selected Writers, Intellectuals and Publicists

From 1970 to 1977 a major project to uncover source material for students of contemporary British history and politics was undertaken at the British Library of Political and Economic Science. Fiananced by the Social Science Research Council, and under the direction of Dr Chris Cook, this project has attempted a unique and systematic operation to locate, and then to make readily available, those archives that provide the indispensable source material for the contemporary historian. This volume (the fifth in the series) provides a guide to the papers of propagandists who were influential in British public life. Included in this volume are the papers of such persons as newspaper editors, leading economists, social reformers, socialist thinkers, trade unionists, industrialists and a variety of theologians and philanthropists. In all, this volume not only completes the findings of the project but opens up the archive sources of a hitherto neglected area of research into contemporary social and political history.

CHRIS COOK was educated at St Catherine's College, Cambridge. After research at Nuffield College, Oxford, he was Lecturer in Politics at Magdalen College, Oxford. In 1970 he moved to the London School of Economics as Senior Research Officer and in 1976 took up his present senior appointment at the Royal Commission on Historical Manuscript6s. He has been author or co-author of many other books on modern history as well as acting as editor of the widely acclaimed British Political Biography series. In 1976 he was elected a Fellow of the Royal Historical Society.

JEFFREY WEEKS was educated at University College London. He subsequently undertook research on contemporary political theory before taking up his current post as Research Officer at the British Library of Political and Economic Science. He is presently engaged on a study of changing social attitudes towards morality and has published a study (with Sheila Rowbotham) of the work of Edward Carpenter and Havelock Ellis.