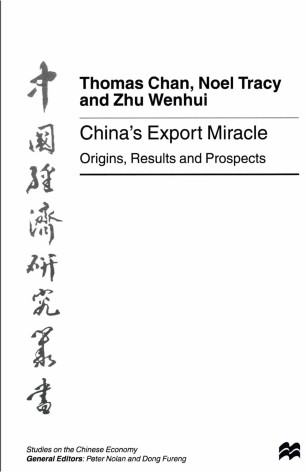 Part of the Studies on the Chinese Economy book series (STCE)

An analysis of the causes and consequences of China's transformation from a minor player to the world's tenth largest trader in less than two decades. It locates the transformation in the synergy created by new forces unleashed in China and their interaction with entrepreneurs in Hong Kong, Taiwan and Southeast Asia, who invested capital, transferred production facilities and provided the marketing channels by which Chinese goods reached world markets. The book also examines the dynamics behind Japan's increasing role in China's foreign trade in the late 1990s and the growing trade friction between China and the United States, which it argues is produced by the failure of the latter to recognise the dynamics of China's export growth.

THOMAS CHAN is Head of China Business Centre, Hong Kong Polytechnic University and was previously Research Officer at the Centre of Asian Studies, University of Hong Kong, and Senior Lecturer, Department of Economics, Baptist University of Hong Kong. He has published widely on topics including FDI in China, industrial development in China and Taiwan and on the Asian financial crisis.

NOEL TRACY is Senior Lecturer in International Relations at Flinders University of South Australia where he has worked since 1992. Previously he was lecturer in the Division of Commerce and Administration at Griffith University in Brisbane. His previous books include: The Chinese Diaspora and Mainland China and Asian Entrepreneurs in Australia