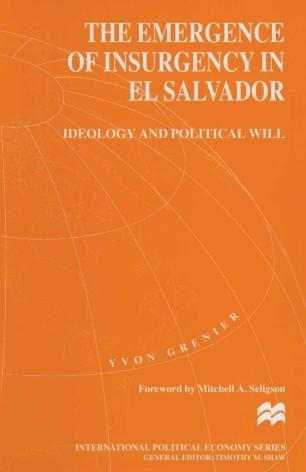 The Emergence of Insurgency in El Salvador

Ideology and Political Will

Grenier offers a better understanding of the causes of revolution in El Salvador through an analysis of the central role of ideas and ideologues. The insurgency was not merely the charismatic embodiment of structurally determined processes, as it is commonly suggested, it was the expression of a distinct and forceful political will. The focus is placed on the period of emergence of insurgency (roughly, the 1970s and early 1980s), a period too often confounded (and not only in the Salvadoran case) with subsequent periods of the revolutionary cycle.

YVON GRENIER is Associate Professor of Political Science at St. Francis Xavier University, in Nova Scotia, former editor of the Canadian Journal of Latin American and Caribbean Studies, and author of many publications, including Guerre et Pouvoir au Salvador (1994).