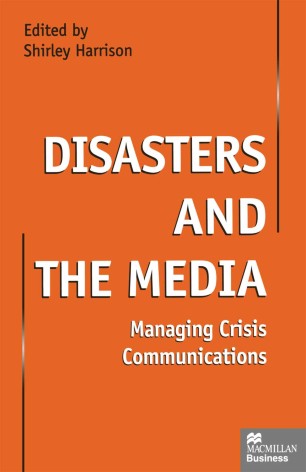 Disasters and the Media

Crisis management is of increasing importance to organisations. With the rise of single-issue pressure groups, the development of sophisticated and informed consumers and volatile voters, no organisation in the public or private sector can afford to neglect preparation for dealing with the disasters that may befall it. This book aims to improve the relationship between the media and those subject to media scrutiny at a time of crisis or disaster by generating mutual understanding of their needs. Drawing on the experience of practitioners, it aims to disseminate good practice. Part I sets the context and raises some general issues on the theme of communicating at a time of crisis or disaster. Part II looks at the relationships between media and those who are trying to manage the crisis in public relations and public information terms. It contains a number of case studies, each contributed by an expert, clearly explaining how a variety of crises and disasters were managed by the organisations concerned, and how they were reported by the media. Part III is an extended case study of the Hillsborough disaster, taking a candid look at what happened from the perspective of four very different people who were closely involved in the aftermath. The final section includes chapters on the value of training and rehearsal, and some of the lessons learned from Dunblane.