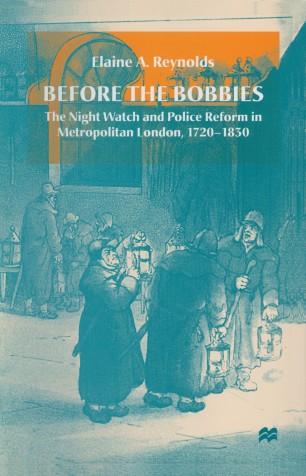 The Night Watch and Police Reform in Metropolitan London, 1720-1830

Historians, legal scholars, sociologists and crime readers will learn from this book that modern policing emerged long before Scotland Yard. Police reform developed over decades, the work of local authorities motivated more by fears of property crime than radicalism or riots. Local and national officials cooperated at many levels to provide relatively effective policing for London, culminating in Sir Robert Peel's centralized Metropolitan Police in 1829. The early modern British state was thus more responsive to urban problems than previously has been acknowledged.

ELAINE A. REYNOLDS was born and educated in upstate New York, earned her undergraduate degree at the State University of New York at Buffalo in 1979 and her doctorate at Cornell University in 1991. She joined the faculty at William Jewell College in 1986 and is now an Associate Professor. She has also taught at Hobart and William Smith College in Geneva, New York and Harlaxton College, Harlaxton, England.