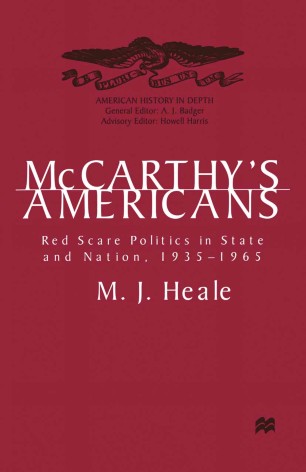 Part of the American History in Depth book series (AHD)

Was the communist witch hunt unleashed by Senator Joe McCarthy an aberration, or has red scare politics been an intrinsic part of American political life since the 1930s? Was McCarthyism a populist or an elitist phenomenon? Was Senator McCarthy virtually irrelevant to the phenomenon?

This book shows that some of the contending interpretations of McCarthyism are mutually compatible and reveals the importance of pressures usually overlooked. Professor Heale's deeply-probing study of Joe McCarthy's `hinterland' in the American states, demonstrates that what is usually called McCarthyism was part of a political cycle, that emerged in the 1930s and took two decades to run its course.

Professor Heale also argues that much of the red scare dynamic came from the big cities and the white South. It was here that a range of interests exhibiting a fundamentalist fury with the changing times - that the political order had fashioned during the New Deal years - rested on fragile foundations. Defying the `consensus liberalism' of the 1950s, Joe McCarthy and, more importantly, the many little McCarthys in the states, kept alive a brand of right-wing politics, preparing the way for George Wallace in the 1960s and the revitalised conservatism of Richard Nixon and Ronald Reagan.