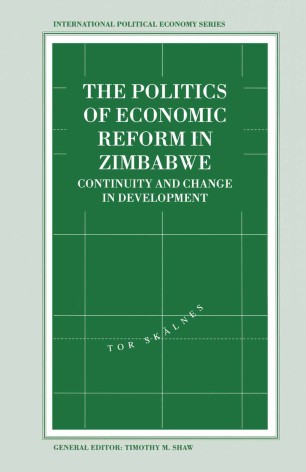 The Politics of Economic Reform in Zimbabwe

Continuity and Change in Development

In 1990 Zimbabwe embarked on economic liberalisation. The country's economic associations, notably that erstwhile proponent of protectionism, the Confederation of Zimbabwe Industries, had successfully lobbied for gradual reform. While state autonomy has often been regarded as a vital condition for reform, in Zimbabwe societal groups have induced an initially recalcitrant government to reconsider its basic policies. After 1980 the government tried to limit political competition. However, because of the perceived need for racial reconciliation following the guerrilla war, it maintained dialogue with settler-dominated interest groups along the pattern of societal corporatism established in the 1930s. By contrast, African associations, particularly labour unions, have regularly been subjected to regimentation. The government, however, has listened more closely to the demands of African farmers, who want to preserve parastatal marketing and governmental determination of prices. In Zimbabwe key urban groups support liberalisation while key rural groups do not. Theories of urban bias must therefore be qualified.