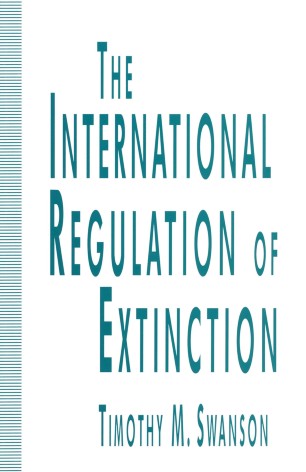 The International Regulation of Extinction

Swanson's book provides a good framework for understanding the extinction process in deeper socio-economic terms, and for evaluating some of the suggestions that have been made to arrest the decline. I am sure it will be of great interest to environmental economists working in this area.' - A. Markandya, Harvard Institute for International Development 'Tim Swanson's International Regulation of Extinction is the most important work on biodiversity to appear for many years. It should cause all concerned, environmentalists, economists, governments, regulators, international agencies to think again. They have misunderstood the causes of extinction, and have misdirected many of their policies as a result. Tim Swanson's work will spawn a whole new era of research. Most importantly, it can help save the world's biodiversity.' - Professor David Pearce, Director, CSERGE, University College London The book presents an economic analysis of the forces contributing to the global decline of biological diversity, and the policies available to control extinctions. The first part of the volume sets forth a revised economic theory of extinction, incorporating the terrestrial and institutional constraints on maintaining existing diversity. It analyses the existing conflicts between human development and biological diversity, entailing an application of the economic theory of learning-by-doing and global nonconvexities. The second half of the volume demonstrates the inefficiency of decentralised (multinational) regulation of biological diversity, and develops the range of approaches available in a global (international) approach to the resource. The policies analysed include transferable development rights, wildlife trade regimes, and intellectual property rights. The book concludes with a proposed agenda for the specification of the framework convention on biological diversity adopted at UNCED in Rio de Janeiro.