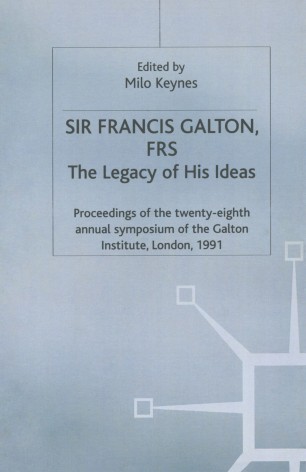 The Legacy of His Ideas: Proceedings of the twenty-eighth annual symposium of the Galton Institute, London, 1991

Part of the Studies in Biology, Economy and Society book series (SBES)

'...this is a splendid, first-class book, the definitive book on Francis Galton and his legacy. The editing has been superb...The timing of its publication is excellent in relation to the increasing interest in human genetics in all areas of the biological and behavioural sciences'.R.Plomin, Distinguished Professor and Director, Center for Development and Health Genetics, Pennsylvania State University Sir Francis Galton (1822-1911), a grandson of Erasmus Darwin, was one of the most versatile men of his time. In his twenties he won fame as an explorer. He worked at the prediction of weather, and described his discovery of the anticyclone He first became an anthropologist in 1862 when he joined the Ethnological Society. He initiated anthropometry and the measurement of human variation, and the use of photography for the analysis of differencies, or individual characteristics, in a group. He recognised the uniqueness of Finger Prints, and, in 1875, first used the records of pairs of identical twins in his researches into the laws of heredity. Besides contributions to human genetics, Galton devised the correlation coefficient, and was thus concerned with the advancement of statistics. In 1883, he coined the word eugenics by which he meant 'good in birth' and 'noble in heredity', and, in 1904, he founded the Galton Laboratory at University College, London. He was first President of the Eugenics Education Society in 1907.