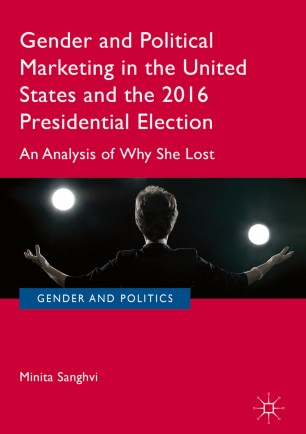 An Analysis of Why She Lost

Part of the Gender and Politics book series

This book focuses on the unique challenges women in politics face in the United States based on their gender. It also focuses on issues of intersectionality in political marketing, including race, age, weight, sexual orientation, gender identity and gender expression. From a theoretical perspective, this book facilitates an investigation of the interplay of gender dynamics and power structures within political marketing. Focusing on women in the United States of both parties at various levels in politics, it examines both historical data and contemporary examples of female politicians and their campaigns. Using qualitative research methods and taking a feminist approach to data collection and analysis, this book features primary source interviews with 15 politicians, including a Governor, Senator, two Congresswomen, and several state and local legislators. It also incorporates interviews with 19 political consultants, PAC executives, aides, political party officials, and members of the media.

Minita Sanghvi is Assistant Professor in the Management and Business Department at Skidmore College, USA, where she teaches marketing, gender and politics. Her work has been published in the Journal of Marketing Management and the Advances in Consumer Research.

“This timely monograph addresses one of the conundrums of contemporary politics – why didn’t the American people vote for the most qualified candidate? Introducing intersectionality to political marketing, a theoretical stream that has been mostly overlooked by the marketing discipline, Dr. Sanghvi is able to provide a welcome, nuanced complexity to the debate. Delving into the multiple biases and sources of inequality, this study moves on from simple gender discrimination. Both historical and contemporary cases from American politics are examined, and feminist, phenomenological interviews with politicians are also integrated to make this discussion both pertinent and broadly considered. Lucidly expressed and thoroughly investigated, this fascinating topic ends on a positive note of hope for the future by pointing to important recent changes and the momentum gathering around women in American politics.” (Jan Brace-Govan, Associate Professor, Monash Business School, Australia)
“Using the tools of modern marketing research, Minita Sanghvi casts fresh light on the election of 2016 and, in so doing, deploys sophisticated gender analysis. Particularly intriguing is her discussion of the ways in which candidates "perform gender." A must-read for all those who care about electing more, and more diverse, women to high office.” (Glenna Matthews, Historian and acclaimed author of Running as a Woman: Gender and Power in American Politics)
“Professor Sanghvi’s timely book explores the influence of gender and race on US politics. This research is uniquely positioned drawing from the fields of both political marketing and gender studies. Sanghvi expertly weaves a rich historical analysis with contemporary stories of successful women politicians. This is a must-read for anyone who wants to understand how to successfully navigate existing power hierarchies in politics.” (Julie Ozanne, Professor, University of Melbourne, Australia, and co-author of Transformative Consumer Research for Personal and Collective Well-Being)
“Excellently crafted and engaging, this is a much-needed book that unpacks the gendered nature of politics from a marketing and branding perspective. It is particularly timely in elucidating the many disadvantages and biases that female politicians face, as well as how they continue to be treated as objects to be approved or derided in accordance with the male gaze. A key contribution of this study to gender in political marketing is revealing important aspects that move us beyond a sole focus on binary categories of male/female to include intersections of gender with race, age, bodyshape, and sexual orientation. Interviews with female politicians bring the content to life, with many enlightening examples of the challenges they face in carrying out both their campaigns for office and more mundane administrative tasks. The text includes an especially insightful in-depth case study analysis of Hillary Clinton’s defeat in the 2016 presidential election. Overall this book is an invaluable resource for all scholars interested in gender and political marketing.” (Pauline Maclaran, Professor of Marketing & Consumer Research in the School of Management at Royal Holloway, University of London, UK, and Co-editor of Motherhoods, Markets and Consumption: The Making of Mothers in Contemporary Western Culture)
Buy options