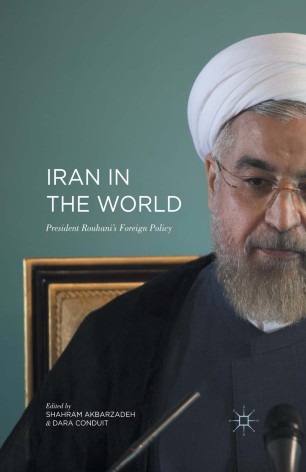 Iran in the World

This book evaluates President Hassan Rouhani's foreign policy during his first two years in office, looking at the case studies of Armenia, Azerbaijan, the UAE, Turkey, and Syria, as well as the Iran-US relationship. President Rouhani came to power in Iran in 2013 promising to reform the country's long-contentious foreign policy. His top priorities were rehabilitating the Iranian economy, ending the nuclear dispute, rebuilding relations with the US, and mending ties with Iran's neighbors. It is argued here that while President Rouhani has made progress in the Iran-US relationship, in nuclear negotiations and some bilateral relationships, his broader success has been hampered by regional political developments and domestic competition. Further, it is contended that his future success will be guided by emerging regional tensions, including whether Iran's neighbors will accept the terms of the nuclear agreement.

Shahram Akbarzadeh is Research Professor of Middle East and Central Asian Politics and Deputy Director (International) of the Alfred Deakin Institute for Citizenship and Globalization at Deakin University, Australia. He currently holds an ARC Future Fellowship on the Role of Islam in Iran's foreign policy and a grant on sectarianism in the Middle East from the Qatar Foundation.

"Iranian foreign policy has always been complex and multifaceted, grounded in revolutionary idealism on the one hand and pragmatic realism on the other. This timely volume examines the Islamic Republic's foreign policy at a time of profound change and transition, highlighting some of the inherent tensions and milestones of the Rouhani administration as it charts a new course for Iran's regional and global roles. This is an original and much-needed contribution to the literature that should be read by policymakers as well as academics." – Mehran Kamrava, Professor and Director of the Center for International and Regional Studies, School of Foreign Service, Georgetown University, Qatar

"This book, focusing on the elements of continuity and the domestic and external drivers of change, brings together many interesting perspectives on Iran and its international relations. Insightful discussions of Iran's regional role are complemented by the sometimes overlooked relationships that Iran has developed over the lifespan of the Islamic Republic. There is much to learn from this work and the direction of research it is illuminating. A fascinating set of chapters." – Anoush Ehteshami, Nasser al-Sabah Professor of International Relations and Director of the HH Sheikh Nasser al-Sabah Research Program, School of Government and International Affairs, Durham University, UK
Buy options