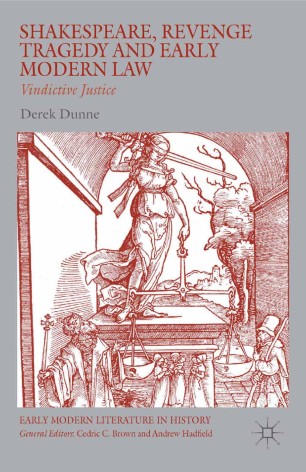 Revenge tragedies are filled with trial scenes, miscarriages of justice and untrustworthy evidence, yet this is the first study to explore how the revenge plays of Kyd, Shakespeare and others critically engage with their legal system. Featuring groups of citizens taking the law into their own hands, revenge tragedies stage a participatory justice of their own, which problematises the progress of English common law during this crucial phase of English legal history.

By connecting English revenge tragedies to major crises within the legal system – including the erosion of trial by jury (Titus Andronicus), food riots in the 1590s (Antonio's Revenge), and debates over royal prerogative (The Revenger's Tragedy) – a persistent legal critique is revealed to be at work. The book also offers a major new reading of Hamlet that argues against the play's engagement with law, in contrast to the radical socio-legal commentary identified in other revenge plays. Revenge tragedy can thus be understood as an index of early modern citizens' fractious relationship with their law.