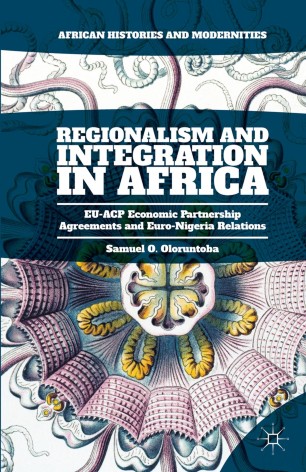 Regionalism and Integration in Africa

Samuel O. Oloruntoba is a Senior Lecturer at the Thabo Mbeki African Leadership Institute, University of South Africa, Pretoria, South Africa. He obtained his PhD in Political Science with specialization in International Political of Economy from the University of Lagos, Nigeria. He was previously a Visiting Scholar at the Program of African Studies, Northwestern University and Brown University, USA.

“Moving deftly between Nigerian, sub-regional, and continental debates on how best to reposition African actors in a globalized world defined by the triumph of Euro-American (and Chinese) capitalist hegemony disguised as globalization, Oloruntoba’s analysis is illuminating in its sweep and depth. Oloruntoba demonstrates how an African integrative agenda can encourage regional flows in multiple sectors, correct the power imbalance between Africa and the rest of the world, and confer autonomous agency on African actors in bilateral and multilateral negotiations.”
-Moses Ochonu, Professor of History, Vanderbilt University, USA
"Oloruntoba has made a significant contribution to challenging the dominant Eurocentric narrative on the relations between Europe and Africa. It is a must read book."
-Yash Tandon, Founder-Chairman, Southern and Eastern African Trade Information and Negotiations Institute, Uganda.
Buy options