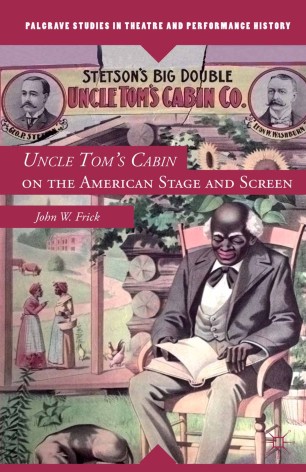 Uncle Tom’s Cabin on the American Stage and Screen

No play in the history of the American Stage has been as ubiquitous and as widely viewed as Uncle Tom's Cabin . This book traces the major dramatizations of Stowe's classic from its inception in 1852 through modern versions on film. Frick introduce the reader to the artists who created the plays and productions that created theatre history.

John Frick is Professor Emeritus of Theatre at the University of Virginia, USA. He is the author of Theatre, Culture and Temperance Reform in Nineteenth-Century America and New York's First Theatrical Center: The Rialto at Union Square as well as co-editor of The Directory of Historic American Theatre and Theatrical Directors: A Biographical Dictionary. He is a past editor of Theatre Symposium, a former Stanley J. Kahrl Fellow at Harvard University, past president of the American Theatre and Drama Society, and the 2010 recipient of the Betty Jean Jones Award for Outstanding Teacher of American Theatre and Drama. While in New York, he worked Off-Off Broadway as a dramaturg and as a stage manager with theatre and dance companies.

"John Frick's comprehensive study of the myriad theatrical and movie interpretations of Uncle Tom's Cabin should be required reading for all scholars of American culture and theatre . . . The scope and breadth of Frick's study is truly epic . . . [it] masterfully and comprehensively synthesizes mountains of primary research data and scholarship on the major American stage and screen adaptations of Uncle Tom's Cabin." - Journal of Dramatic Theory and Criticism

"Frick not only illuminates nineteenth-century stage practices (for example, the odious custom of white actors performing in blackface) and the play itself, but he also provides a panoramic view of the titanic social issues inherent in the play and that the work directly influenced, in regard to slavery . . . Frick's eye for engaging details and his astute and thorough scholarship provide a treasure trove for theatre and cultural historians . . . Frick's study makes clear that the play's ongoing dialogue with its culture, for better or worse, is as enduringly American as that proverbial apple pie." - Broadside