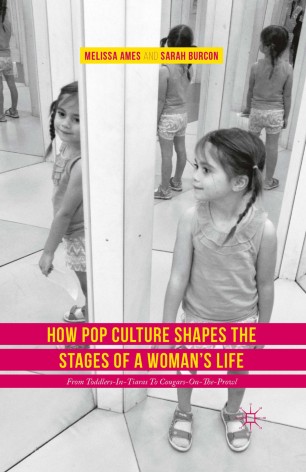 How Pop Culture Shapes the Stages of a Woman’s Life

Contemporary popular culture has created a slew of stereotypical roles for girls and women to (willingly or not) play throughout their lives: The Princess, the Nymphette, the Diva, the Single Girl, the Bridezilla, the Tiger Mother, the M.I.L.F, the Cougar, and more. In this book Ames and Burcon investigate the role of cultural texts in gender socialization at specific pre-scripted stages of a woman's life (from girls to the "golden girls") and how that instruction compounds over time. By studying various texts (toys, magazines, blogs, tweets, television shows, Hollywood films, novels, and self-help books) they argue that popular culture exists as a type of funhouse mirror constantly distorting the real world conditions that exist for women, magnifying the gendered expectations they face. Despite the many problematic, conflicting messages women receive throughout their lives, this book also showcases the ways such messages are resisted, allowing women to move past the blurry reality they broadcast and toward, hopefully, gender equality.

Melissa Ames is an Associate Professor at Eastern Illinois University specializing in media studies, television scholarship, popular culture, feminist theory, and pedagogy. Her most recent and forthcoming publications include her books, Women and Language (2011) and Time in Television Narrative (2012); chapters in Grace Under Pressure: Grey's Anatomy Uncovered (2008), Writing the Digital Generation (2010), Bitten by Twilight (2010), and Manufacturing Phobias (2015); and articles in The Journal of Dracula Studies (2011), The Women and Popular Culture Encyclopedia (2012), The High School Journal (2013), The Journal of Popular Culture (2014), and Pedagogy (2017).

Sarah Burcon is a Lecturer in the Program for Technical Communication at the University of Michigan in Ann Arbor. She specializes in technical communication, feminist theory, popular culture, and linguistics. She has published in anthologies and encyclopedias, and her most recent publications include her books, Women and Language: Essays on Gendered Communication Across Media (2011), Fabricating the Body (2014); chapters in Time in Television Narrative: Exploring Temporality in 21st Century Programming (2012) and Revisiting the Past through Rhetorics of Memory and Amnesia (2011); and articles for Women and Popular Culture Encyclopedia (2014).

“How Pop Culture Shapes the Stages of a Woman’s Life focuses on how popular culture has created stereotypical roles for women that have potentially limited their progress. … The book is clearly intended for a scholarly audience but is accessible for the lay reader as well.” (Maire Simington, Journal of American Culture, Vol. 41 (2), June, 2018)
“In this timely and accessible book, Ames (Eastern Illinois Univ.) and Burcon (Univ. of Michigan) use meta-analyses of audience studies, textual analyses of blogs, user comments and reviews of media texts and products, and one survey to analyze regressive popular cultural texts (e.g., films, toys, self-help books) and stereotypical representations of cisgender girls and women. … Summing Up: Recommended. Upper-division undergraduates through faculty.” (T. E. Adams, Choice, Vol. 54 (3), November, 2016)
Buy options