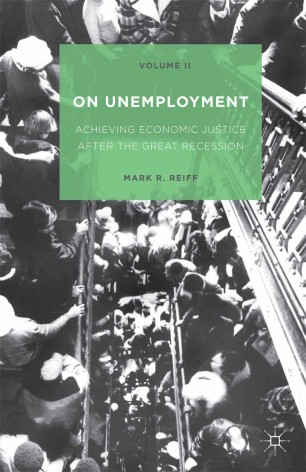 With unemployment at historically high rates that show signs of becoming structural, there is a pressing need for an in-depth exploration of this economic injustice. Unemployment is one of the problems most likely to put critical pressure on our political institutions, disrupt the social fabric of our way of life, and even threaten the continuation of liberalism itself. Despite the obvious importance of the problem of unemployment, however, there has been a curious lack of attention paid to this issue by contemporary non-Marxist political philosophers. On Unemployment explores the moral implications of the problem of unemployment despite the continuing uncertainty involving both its causes and its cures. Reiff takes up a series of questions about the nature of unemployment and what justice has to tell us about what we should do, if anything, to alleviate it. The book comprehensively discusses the related theory and suggests how we might implement these more general observations in the real world. It addresses the politics of unemployment and the extent to which opposition to some or all of the book's various proposals stem not from empirical disagreements about the best solutions, but from more basic moral disagreements about whether the reduction of unemployment is indeed an appropriate moral goal. This exciting new text will be essential for scholars and readers across business, economics, and finance, as well as politics, philosophy, and sociology.

Mark R. Reiff teaches legal and political philosophy at the University of Manchester's School of Law, UK. He is the author of two previous books: Exploitation and Economic Justice in the Liberal Capitalist State (2013), and Punishment, Compensation, and Law (2005), as well as various papers on political, legal, and moral philosophy. During the 2008-09 academic year, Reiff was a Visiting Faculty Fellow at the Safra Center for Ethics at Harvard University, USA.