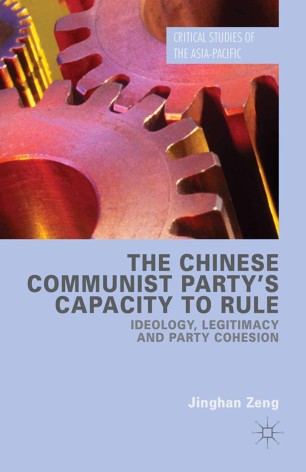 Why did the Chinese Communist Party (CCP) not follow the failure of the communist regimes in Eastern Europe and the Soviet Union? This book examines this question by studying two crucial strategies that the CCP feels it needs to implement in order to remain in power: ideological reform and the institutionalization of leadership succession.

Jinghan Zeng is a Lecturer in International Relations in the Department of Politics and International Relations at Royal Holloway, University of London. He is also an Associate Fellow in the Centre for the Study of Globalisation and Regionalisation at the University of Warwick and a Fellow of the UK Higher Education Academy. His research and teaching interests lie in the field of Chinese politics and research methodology, with more specific interests in the study of China's authoritarian system, elite politics of contemporary China, and Chinese foreign policy. His academic papers have appeared in International Affairs, Contemporary Politics, Journal of Contemporary China, and Journal of Chinese Political Science. Before his academic career, he worked for the United Nations' Department of Economic and Social Affairs in New York City.