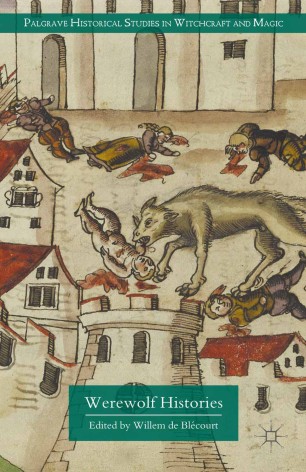 Werewolf Histories is the first academic book in English to address European werewolf history and folklore from antiquity to the twentieth century. It covers the most important werewolf territories, ranging from Scandinavia to Germany, France and Italy, and from Croatia to Estonia.

“Werewolf Histories is a fascinating look at the diversity of beliefs about werewolves, and a valuable reminder of the different contexts in which these beliefs occur. … Werewolf Histories is packed with fascinating analysis of an under-examined piece of folklore. It’s particularly compelling because of the way in which it looks at the phenomenon of werewolf belief from several different scholarly perspectives.” (James Holloway, Fortean Times, Vol. 335, December, 2015)

'The volume's aims, as outlined in de Blécourt's introductory essay, are met by the essays collected, particularly the stated intention to mark a 'transition from popular werewolf publications to academic historical perspectives'. The clear and nuanced historical perspectives presented certainly set the volume apart from the putative 'werewolf history' presented in the popular publications that are commonly cited in studies of contemporary literary and cinematic werewolves.' Hannah Priest, Swansea University, UK