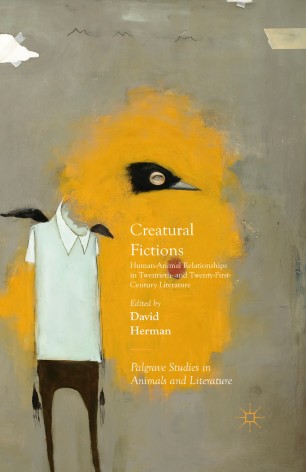 This volume explores how twentieth- and twenty-first-century literary texts engage with relationships between humans and other animals. Written by forward-thinking early-career scholars, as well as established experts in the field, the chapters discuss key texts in the emergent canon of animal narratives, including Franz Kafka's animal stories, Yann Martel's The Life of Pi, Zakes Mda's The Whale Caller, and others. The volume is divided into four main sections. Two period-focused sections center on modernism and on late-twentieth- and twenty-first-century fiction, while two further sections foreground the more general project of theory building in literary animal studies, examining interconnections among concepts of species, sexuality, gender, and genre. The volume also raises issues that extend beyond the academic community, including ethical dimensions of human-animal relationships and the problems of species loss and diminishing biodiversity.

David Herman is Professor of the Engaged Humanities at Durham University, UK. His previous books include Basic Elements of Narrative and Storytelling and the Sciences of Mind.

"David Herman has assembled a superb and vitally relevant cross-section of evidence from the expanding frontier where literature and theory contemplate the evocative counsel of our animal messengers." - Jonathan Lethem, Roy Edward Disney Professor in Creative Writing, Ponoma College, USA

"In this rich and theoretically robust volume of essays, animals emerge as constitutive not only of human identity but of modern and postmodern fiction. Putting into practice a creaturely approach to literary studies, Creatural Fictions illustrates the myriad ways in which the shared bodily being of humans and animals is foundational for all rhetorical, political, and ethical acts. Moving freely between the canon and the periphery and attending to questions of form, genre, sexuality, and gender, the fluctuations of species are brought to bear on every aspect of literary endeavor. Here is an expansive exploration of critical practice after the 'animal turn' that will reshape the disciplines we so narcissistically call the 'humanities.'" - Anat Pick, Senior Lecturer of Film Studies, Queen Mary, University of London, UK

"This cutting-edge anthology brings together an impressive group of established and emerging scholars to showcase the central themes and issues that motivate literary animal studies. Discussing authors from Kafka to Coetzee and Martel to Mda, the authors provide insightful readings of essential texts that will be of interest to students and scholars alike. This volume will help readers appreciate the numerous ways in which literature serves both to inform and challenge contemporary work in critical animal studies." - Matthew Calarco, Associate Professor of Philosophy, California State University, Fullerton, USA

"In this fascinating and compelling collection of transdisciplinary approaches to animals in modern and contemporary literature, the writers move from the 'creaturely' to the 'creatural.' Rather than emphasizing creaturely differences, the contributors highlight cross-creatural continuities between humans and nonhuman animals. Engaging with a wide range of human-animal relationships, the essays in Creatural Fictions hone in on a variety of literature—from the historical romance to postcolonial fiction—from around the world. Examining texts by writers hailing from the Global North and South, East and West, the essays in Creatural Fictions reconsider the very notion of the animal." - Jeanne Dubino, Professor of English, Appalachian State University, USA and coeditor of Representing the Modern Animal in Literature