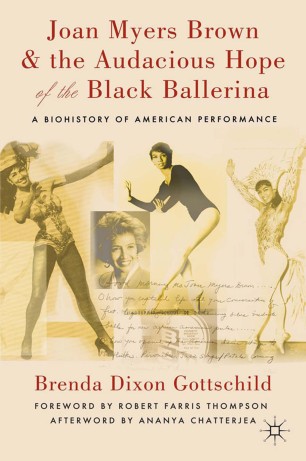 Joan Myers Brown & the Audacious Hope of the Black Ballerina

A Biohistory of American Performance

Founder of the Philadelphia Dance Company (PHILADANCO) and the Philadelphia School of Dance Arts, Joan Myers Brown's personal and professional histories reflect the hardships as well as the advances of African-Americans in the artistic and social developments of the second half of the twentieth and the early twenty-first centuries.

Author Brenda Dixon Gottschild: Brenda Dixon Gottschild, author of Digging the Africanist Presence in American Performance, Waltzing in the Dark, and The Black Dancing Body, is Professor Emerita of Dance Studies at Temple University, USA, and a former senior consultant and writer for Dance Magazine. She lectures nationally and internationally, using her own dancing/thinking body to illustrate her ideas and blur the division between practice and theory. She is the recipient of the 2013 Scholar Award from the International Association of Blacks in Dance.

"Dixon Gottschild pays particular attention to those who worked before, alongside, and with her [namely, Joan Myers Brown] to create what is becoming her legacy. She does this deftly, with sophisticated prose that is just as familiar and accessible as it is intellectually sound.' - Dance Research Journal

"Brenda Dixon Gottschild brings a bracing mix of scholarship and unsentimental compassion to bear on the story of Joan Myers Brown, a classy, feisty, eminently pragmatic visionary whose life and dance company occupy a vivid and important place in the largely unexamined history of dance in Philadelphia. This book is an indispensable good-read about an individual and her epic fight to make a place for herself in a world that did not accept black-skinned dancers like her and then to build and maintain a major American dance company. But the book is much more. In the detail of the day-to-day work of being a dancer and developing dancers against the odds, so vividly evoked, too, in Myers Brown's pithy and unexpectedly poignant observations, Dixon Gottschild has captured the struggle of black Americans to help shape the culture of their country." - Jennifer Dunning, former dance critic, The New York Times

"Joan's artistic accomplishments and contributions to the dance world occupy a special place in history. Generations of dancers have her to thank for the doors she opened. For years, I've appreciated her wisdom, enthusiasm, and support. Joan has been trailblazer in her professional life, and I feel fortunate to call her a friend." - Michael M. Kaiser, President, The John F. Kennedy Center for the Performing Arts

"What a wonderful book for a most creative woman! Brenda Dixon Gottschild, we thank you for letting us see a 'genius' at work." - Sonia Sanchez, Poet, Educator, Activist

"Joan Myers Brown is a legend in the world of artistic dance. We now have her fascinating story for the world in Brenda Dixon Gottschild's brilliant book!" - Cornel West, Princeton University and author of Race Matters

"Brenda Dixon Gottschild's biography of Joan Myers Brown is an audacious springboard for an exhaustive investigation into the racist social structures of 20th-century America that placed almost insuperable double binds on people of color. How 'JB' and the Philadelphia dance community coped with and surmounted class and color contradictions is a testament of enduring courage, resilience, and self-invention. With its eye-opening analysis of the interplay of skin tone, cultural aspirations, and social status exemplified in western classical dance, the book is not only a fascinating, poignant, and scholarly history, but reads like a house on fire." - Yvonne Rainer, Distinguished Professor of Studio Art, Performance, and History of Experimental Film, UC Irvine, and a founder of the Judson Dance Theater

"Smoothly-written by our most accomplished chronicler of American dance and race politics, this essential volume demonstrates the impact black Americans have made in the performing arts against long odds. Brown's story will be familiar to every African American girl who ever wanted to be a ballerina. Newly-mined documentation of the vibrant dance cultures of Philadelphia and the inner workings of Philadanco, the internationally-recognized modern dance company that Brown created to international acclaim, provide cogent context to understand dance, gender, and especially race in the American performing arts. Gottschild reveals a hidden history of black ballet crucial to understanding African American presence in contemporary dance." - Thomas F. DeFrantz, author of Dancing Revelations: Alvin Ailey's Embodiment of African American Culture and President, Society of Dance History Scholars

"Audacious Hope, a critical analysis of the life and work of Joan Myers Brown, is a visionary study that breaks new ground in several ways: It provides a much-needed history of the development of dance in Philadelphia, examining its unique racism as well as the more general racist values espoused by the entire country. It integrates oral history with a more general portrait of the community and its sense of identity, offering a commanding overview of the changing beliefs around African-American identity and rights from the 1940s to the present. It details the vital relationship between a company, Philadanco, and its school and the staff who administer both. It shows how there are no rigid boundaries between the worlds of concert dance and entertainment and social dance productions. And it provides a brilliant analysis of the motivations on the part of African American middle class to assimilate white culture but also to adapt it and make it their own. As in her other works, Dixon-Gottschild gives us a deeply thoughtful and complex rendering of the participation of dance in the formulation of identity and community, one that also provides a powerful revisionist focus on the importance of Philadelphia in the formation of concert dance in the U.S." - Susan Leigh Foster, Distinguished Professor, Department of World Arts and Cultures/Dance, UCLA

"In telling the story of Philadanco, Brenda Dixon Gottschild not only brings a dance company's history and vibrant present to life, she thoughtfully and insightfully discusses the ethos of Philadelphia, the lifestyles of its black community, changing race relations, and the decades-ago experiences of African Americans who, like Philadanco's spunky founder-director, Joan Myers Brown, aspired to be ballet dancers." - Deborah Jowitt, dance critic and historian, and author of Jerome Robbins: His Life, His Theater, His Dance