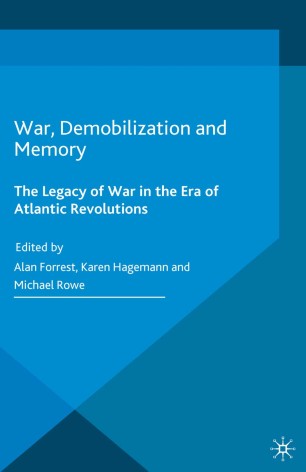 The Legacy of War in the Era of Atlantic Revolutions

The years from 1770 to 1830 were scarred by war throughout the Atlantic world. These were wars about empire and global hegemony, as well as struggles of liberation and decolonization. During this era the Atlantic became a highway for exchange not only of peoples and commodities, but also of ideas and cultural practices. New forms of mass warfare, for which patriotic-national propaganda mobilized soldiers and civilians alike, characterized these conflicts in Europe and the Americas. The contributors to this volume, all established experts in their field, examine the processes of military, economic, political, social and cultural demobilization after these wars, not only by states but also by local communities and individuals, and explore the long-term legacy of these conflicts. They discuss how their aftermath influenced politics, society and culture, including the gender order, and ask what shaped the contested and changing memories of these wars in the decades that followed.

Alan Forrest is Emeritus Professor of History at the University of York, UK. His research and teaching focuses on modern French and European history. His most recent books are Waterloo (2015); and War Memories: The Revolutionary and Napoleonic Wars in Modern European Culture, ed. with Étienne François and Karen Hagemann (2012).

Karen Hagemann is James G. Kenan Distinguished Professor of History at the University of North Carolina at Chapel Hill, USA. She has published widely on modern German, European and transatlantic history, gender history and the history of military and war. Her most recent monograph is Revisiting Prussia's Wars Against Napoleon: History, Culture, Memory (2015).

Michael Rowe is Senior Lecturer of Modern European History at King's College London, UK. His research focuses on nineteenth century Germany. His publications include From Reich to State: The Rhineland in the Revolutionary Age (2003); and as editor, Collaboration and Resistance in Napoleonic Europe: State-Formation in an Age of Upheaval, c. 1800–1815 (2003).

“This impressive and stimulating collection of papers highlights why war was a crucible of change in global politics at the dawn of the nineteenth century, as well as the tenacity of the community structures it failed to shatter.” (Tom Stammers, French History, Vol. 33 (1), March, 2019)
“This volume is a thought-provoking collection of essays borne out of a 2013 international conference. … as historical study continues to turn increasingly to encompass a wider view outside the national narrative, this edited collection can claim to have set the course for new and exciting future studies in what is a popular and ever expanding area of research.” (Mario Draper, European History Quarterly, Vol. 47 (1), 2017)
Buy options