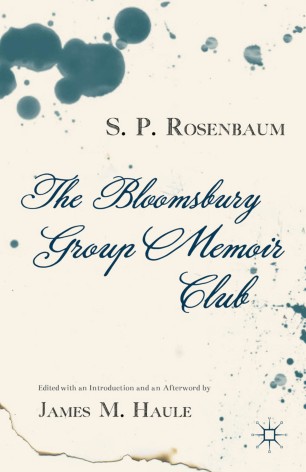 Shortly before his death, S. P. Rosenbaum began work on the history of the Bloomsbury Group's 'Memoir Club'. With original archival material and valuable insights on leading Bloomsbury figures such as Woolf, Keynes and Forster, this illuminating book offers a new perspective on our understanding of twentieth-century autobiography and life writing.

James M. Haule is Emeritus Professor of English at the University of Texas Pan American, USA. He is a distinguished scholar and author and was a member of the Editorial Committee of the Shakespeare Head Press Edition of Virginia Woolf and edited its edition of The Waves. Previous publications also include Editing Virginia Woolf: Interpreting the Modernist Text (with J. H. Stape, 2002).

'The number of people now preoccupied with life-writing and memoirs is extraordinarily large; when we are talking about the figures in the Memoir Club, the interest expands incredibly exponentially. It would be difficult to exaggerate the importance of understanding the work of the Memoir Club in regard to the history of twentieth-century British culture. And no one would be more qualified than the late S.P. Rosenbaum to write the history of a club that included, basically, the 'membership' of the Bloomsbury Group.' - Morris Beja, Emeritus Professor of English, Ohio State University, USA

'Rosenbaum's project, left unfinished at his death in 2012, was to reconstruct as far as possible the club's history and to republish the existing papers in a single accompanying volume his notes make a convincing case for reconsidering the memoirs in context, as a group of essays with internal connections' - London Review of Books

'S P Rosenbaum sadly died before he could complete this book about an aspect of Bloomsbury that is often forgotten the group's love of autobiography It is nevertheless a fascinating account and of a group who were famously intertwined.' - Lesley McDowell, The Independent

'Rosenbaum, who died shortly before finishing this fine book, makes a terrific case for the way that reaching into their personal and collective pasts pushed club members to take their work to new that is, old places.' - Kathryn Hughes, The Guardian