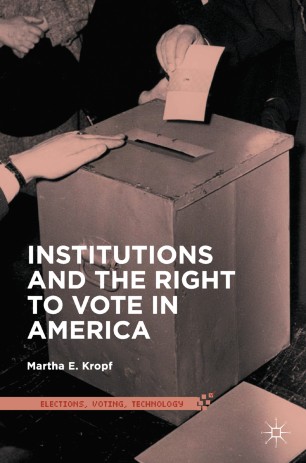 Institutions and the Right to Vote in America

This book explores how the United States institutions of democracy have affected a citizen’s ability to participate in politics.  The 2000 election and the ensuing decade of research demonstrated that that the institutions of elections vitally affect participation.  This book examines turnout and vote choice, as well as elections as an institution, administration of elections and the intermediaries that affect a citizen’s ability to cast a vote as intended. Kropf traces the institutions of franchise from the Constitutional Convention through the 2012 election and the general themes of how institutions have changed increasing, democratization and production federal growth over time in the United States.

Martha E. Kropf is Professor of Political Science and Interim Director of the Public Policy Program at University of North Carolina, Charlotte, USA. She has authored numerous scholarly articles concerning elections, election reform, and voting. She is the coauthor, along with David C. Kimball, of Helping America Vote: The Limits of Election Reform (2012).