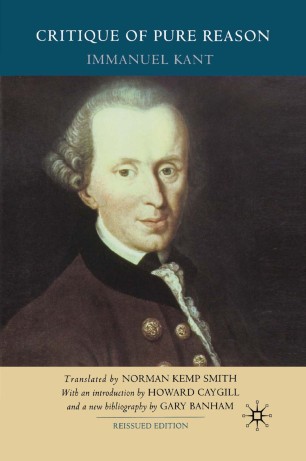 Kant's Critique of Pure Reason is one of the most rewarding of all philosophical works. The text follows the second edition of 1787, with a translation of all first edition passages altered or omitted. For this reissue of Kemp Smith's classic 1929 edition, Gary Banham contributes a major new Bibliography of secondary sources on Kant.

NORMAN KEMP SMITH was born in Dundee in 1872 and died in Edinburgh in 1958. He lectured at Princeton between 1906 and 1919, and between 1919 and 1945 was Professor of Logic and Metaphysics in the University of Edinburgh, UK. Amongst his books are The Philosophy of David Hume (1941), New Studies in the Philosophy of Descartes (1952) and The Credibility of Divine Existence (1967), his collected papers edited by A.J.D. Porteous, R.D. Maclennan and G.E. Davie.

HOWARD CAYGILL is Professor at Goldsmiths College, University of London, UK. His recent publications include A Kant Dictionary (Blackwells).

GARY BANHAM is Senior Lecturer in Philosophy at Manchester Metropolitan University, UK. He has published a number of books on Kant with the Scholarly and Reference Division of Palgrave.