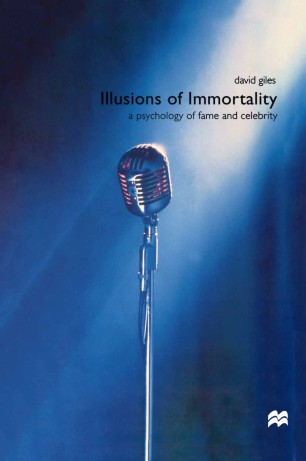 A Psychology of Fame and Celebrity

What drives people to crave fame and celebrity? How does fame affect people psychologically? These issues are frequently discussed by the media but up till now psychologists have shied away from an academic away from an academic investigation of the phenomenon of fame. In this lively, eclectic book David Giles examines fame and celebrity from a variety of perspectives. He argues that fame should be seen as a process rather than a state of being, and that `celebrity' has largely emerged through the technological developments of the last 150 years.

Part of our problem in dealing with celebrities, and the problem celebrities have dealing with the public, is that the social conditions produced by the explosion in mass communications have irrevocably altered the way we live. However we know little about many of the phenomena these conditions have produced - such as the `parasocial interaction' between television viewers and media characters, and the quasi-religious activity of `fans'. Perhaps the biggest single dilemma for celebrities is the fact that the vehicle that creates fame for them - the media - is also their tormentor.

To address these questions, David Giles draws on research from psychology, sociology, media and communications studies, history and anthropology - as well as his own experiences as a music journalist in the 1980s. He argues that the history of fame is inextricably linked to the emergence of the individual self as a central theme of Western culture, and considers how the desire for authenticity, as well as individual privacy, have created anxieties for celebrities which are best understood in their historical and cultural context.

DAVID GILES is Senior Lecturer in Psychology at Coventry University. He was born in London in 1964. After graduating from Essex University with a degree in comparative literature, he worked as a freelance journalist in London, where he was a regular contributor to City Limits and Music Week. In 1990 he went to Manchester University to study psychology, and in 1996 he was awarded a Ph.D. by Bristol University.