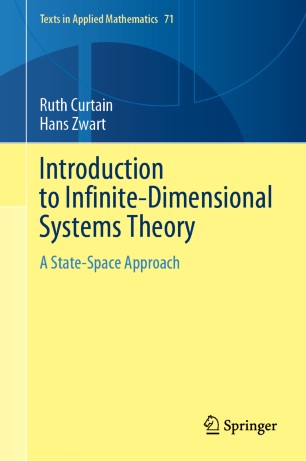 Infinite-dimensional systems is a well established area of research with an ever increasing number of applications. Given this trend, there is a need for an introductory text treating system and control theory for this class of systems in detail. This textbook is suitable for courses focusing on the various aspects of infinite-dimensional state space theory.
This book is made accessible for mathematicians and post-graduate engineers with a minimal background in infinite-dimensional system theory. To this end, all the system theoretic concepts introduced throughout the text are illustrated by the same types of examples, namely, diffusion equations, wave and beam equations, delay equations and the new class of platoon-type systems. Other commonly met distributed and delay systems can be found in the exercise sections. Every chapter ends with such a section, containing about 30 exercises testing the theoretical concepts as well. An extensive account of the mathematical background assumed is contained in the appendix.

Ruth F. Curtain (born Melbourne, Australia, 1941) completed her early academic education (B.Sc. (Hons) 1962, Dip.Ed. 1963, M.A. Mathematics 1965) at the University of Melbourne and a Ph.D. in Applied Mathematics at Brown University, Providence, R.I., USA in 1969. She was Assistant Professor at Purdue University from 1970 to 1971 and spent 1971 to 1977 at the Control Theory Centre, University of Warwick, UK. At present she is emeritus professor in the mathematics department of the University of Groningen where she has worked since 1977. Her research interests lie in the area of infinite-dimensional systems theory. She is the co-author of two books in this field: “Infinite Dimensional Systems Theory”, LNCIS, volume 8, Springer Verlag, 1978, with A.J. Pritchard, and ”An Introduction to Linear Infinite-Dimensional System Theory”, Springer Verlag, 1995, with H.J. Zwart. She has served as associate editor for the international journals Systems and Control Letters, Automatica, the journal Mathematics of Control, Signals and Systems and the Journal of Mathematical Systems, Estimation and Control and as an editor for Automatica. For contributions to the control theory of stochastic systems and infinite-dimensional systems she was elected to the grade of Fellow in the IEEE in 1991.

Hans Zwart (born Hoogezand-Sappemeer, The Netherlands, 1959) received his Masters degree in mathematics in 1984 and his Ph.D. in 1988 at the University of Groningen. Since 1988 he is with the Department of Applied Mathematics, University of Twente, the Netherlands, where he is now full professor. His research interest lies in the area of distributed parameter systems. In addition, he holds a part-time professorial position at the department of Mechanical Engineering, Eindhoven University of Technology. He is the co-author of many papers and of the text books “An Introduction to Linear Infinite-Dimensional System Theory”, Springer Verlag, 1995, with R.F. Curtain and of “Linear Port-Hamiltonian Systems on Infinite-Dimensional Spaces” with B. Jacob. Current research topics include system theory for distributed parameter systems with a Hamiltonian dynamics and controller design for mechanical systems.