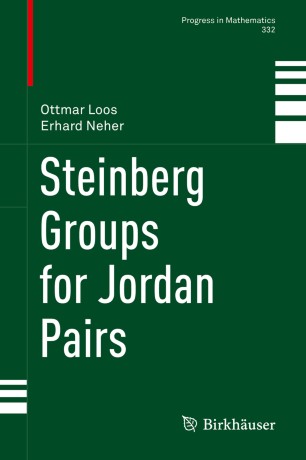 Part of the Progress in Mathematics book series (PM, volume 332)

Steinberg groups, originating in the work of R. Steinberg on Chevalley groups in the nineteen sixties, are groups defined by generators and relations. The main examples are groups modelled on elementary matrices in the general linear, orthogonal and symplectic group. Jordan theory started with a famous article in 1934 by physicists P. Jordan and E. Wigner, and mathematician J. v. Neumann with the aim of developing new foundations for quantum mechanics. Algebraists soon became interested in the new Jordan algebras and their generalizations: Jordan pairs and triple systems, with notable contributions by A. A. Albert, N. Jacobson and E. Zel'manov.
The present monograph develops a unified theory of Steinberg groups, independent of matrix representations, based on the theory of Jordan pairs and the theory of 3-graded locally finite root systems.
The development of this approach occurs over six chapters, progressing from groups with commutator relations and their Steinberg groups, then on to Jordan pairs, 3-graded locally finite root systems, and groups associated with Jordan pairs graded by root systems, before exploring the volume's main focus: the definition of the Steinberg group of a root graded Jordan pair by a small set of relations, and its central closedness. Several original concepts, such as the notions of Jordan graphs and Weyl elements, provide readers with the necessary tools from combinatorics and group theory.
Steinberg Groups for Jordan Pairs is ideal for PhD students and researchers in the fields of elementary groups, Steinberg groups, Jordan algebras, and Jordan pairs. By adopting a unified approach, anybody interested in this area who seeks an alternative to case-by-case arguments and explicit matrix calculations will find this book essential.