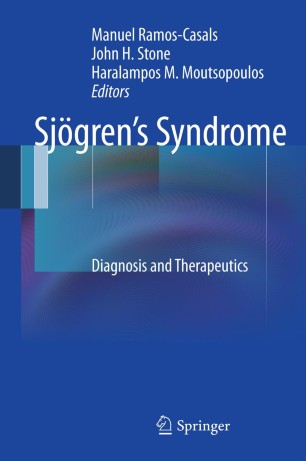 Manuel Ramos Casals, MD, PhD is a Consultant of the Department of Systemic Autoimmune Diseases, Hospital Clínic, Barcelona, Head of the "Josep Font" Laboratory of Autoimmune Diseases of the IDIBAPS, Hospital Clinic, Barcelona and Assistant Professor, Department of Medicine, University of Barcelona, Barcelona, Spain. He has published more than 100 original articles focused on Sjögren’s syndrome and related conditions, has edited 6 books on systemic autoimmune diseases and has received several national grants to investigate autoimmune diseases.

John H. Stone, MD, MPH is Clinical Director of Rheumatology, Harvard Medical School, Boston, MA, USA and the Chairman of the International Network for the Study of the Systemic Vasculitides (INSSYS). Dr Stone's research interests relate to translational investigations in systemic vasculitis. He has directed two multicenter clinical trials in Wegener's granulomatosis and antineutrophil cytoplasmic antibody-associated vasculitis, the Wegener's Granulomatosis Etanercept Trial (WGET) and the Rituximab in ANCA-associated Vasculitis (RAVE) trial. His other research efforts relate to the identification of new biomarkers through proteomic approaches, and to the development of clinical trials' outcome measures in rheumatic autoimmune diseases.

Haralampos M. Moutsopoulos, MD, FACP, FRCP is a Professor and Head of the Department of Pathophysiology, Medical School, University of Athens, Greece. He has contributed to current understanding of the clinical aspects, pathogenesis and therapy of autoimmune rheumatic disorders. He is considered a world authority on Sjögren's syndrome (autoimmune epithelitis). His scientific work is extensively cited and he has been presented with numerous national and international awards.

The Editors have extensive experience in the management of the main systemic autoimmune diseases, such as systemic lupus erythematosus, vasculitis and especially Sjögren’s syndrome. They have developed many clinical and basic research projects and, in the last 5 years, have published many reports on Sjögren’s syndrome and other autoimmune diseases in the leading journals in rheumatology and internal medicine.

“This is a detailed examination of Sjogren’s syndrome, from pathogenesis to diagnosis and treatment of the disease. One of the book’s greatest strengths is its utility as a reference. … appropriate for students, residents, and practitioners, but especially for practicing rheumatologists. … the book is quite enjoyable and easy to read cover-to-cover. The writing is clear and the subject is covered thoroughly. … This is probably the most outstanding, authoritative book on the subject that I have encountered. Any rheumatologist could benefit from reading it.” (Jonathan Miner, Doody’s Review Service, February, 2013)