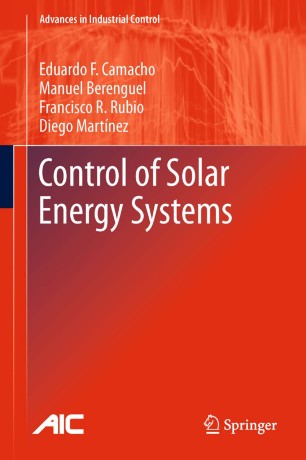 Control of Solar Energy Systems details the main solar energy systems, problems involved with their control, and how control systems can help in increasing their efficiency.  After a brief introduction to the fundamental concepts associated with the use of solar energy in both photovoltaic and thermal plants, specific issues related to control of solar systems are embarked upon. Thermal energy systems are then explored in depth, as well as  other solar energy applications such as solar furnaces and solar refrigeration systems. Problems of variable generation profile and of the contribution of many solar plants to the same grid system are considered with the necessary integrated and supervisory control solutions being discussed. The text includes material on:

·         A comparison of basic and advanced control methods for parabolic troughs from PID to nonlinear model-based control;

Control of Solar Energy Systems contains worked examples and simulation models in the text but its particular strength is its description of real plant installations and applications. These make the text ideally suited to the needs of practitioners from either the solar energy or control engineering communities. Academics studying the various types of control algorithm described in the book will also find it of value as a reference for details of their application and the fact that only basic prior knowledge of control theory and sampled data analysis is required makes the book suitable as a resource for graduate students.

There is a new author in the list: Diego Martinez who is the director of the "Plataforma Solar de Almeria", one of the most important solar energy research facilities in the world where an important part of the existing solar technology has been developed. E. F. Camacho is one of the Editor of the Control Engineering Practice Journal, Associate Editor of the European Journal of Control, Chairman of the IFAC Publication Committee, chair of the IEEE CSS International Affairs Committee, and Vice president of the European Union Control Association.