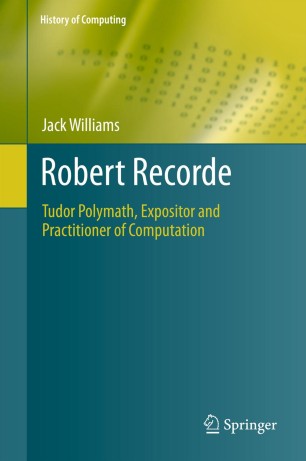 The 16th-Century intellectual Robert Recorde is chiefly remembered for introducing the equals sign into algebra, yet the greater significance and broader scope of his work is often overlooked.

Robert Recorde: Tudor Polymath, Expositor and Practitioner of Computation presents an authoritative and in-depth analysis of the man, his achievements and his historical importance. This scholarly yet accessible work examines the latest evidence on all aspects of Recorde’s life, throwing new light on a character deserving of greater recognition.

This fascinating insight into a much under-appreciated figure is a must-read for researchers interested in the history of computer science and mathematics, and for scholars of renaissance studies, as well as for the general reader.

“This volume primarily consists of a very detailed examination of Recorde’s four major mathematical books. … For the graduate student in the history of mathematics, this thorough and detailed work would be valuable.” (M. D. Derk, ACM Computing Reviews, March, 2012)

“This book fills a gap in historical biography that has existed for far too long. … The majority of the chapters describe Recorde’s life and career, but four are devoted to the description and analysis of his four mathematical works … for which he is most famous. … an excellent book. I can recommend it.” (John Denniss, The Mathematical Association of America, April, 2012)