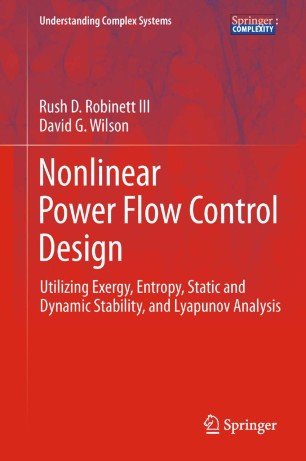 • to create a unifying metric to compare the value of different energy sources – coal-burning power plant, wind turbines, solar photovoltaics, etc. – to be integrated into the electric power grid and to replace the typical metric of costs/profit;

• to develop a new nonlinear control tool that applies power flow control, thermodynamics, and complex adaptive systems theory to the energy grid in a consistent way; and

• to apply collective robotics theories to the creation of high-performance teams of people and key individuals in order to account for human factors in controlling and selling power into a distributed, decentralized electric power grid.

All three of these goals have important concepts in common: exergy flow, limit cycles, and balance between competing power flows. In place of the typical zero-sum, stability vs. performance, linear controller design process, the authors propose a unique set of criteria to design controllers for a class of nonlinear systems with respect to both performance and stability, and seamlessly integrating information theoretic concepts. A combination of thermodynamics with Hamiltonian systems provides the theoretical foundation which is then realized in a series of connected case studies. It allows the process of control design to be viewed as a power flow control problem, balancing the power flowing into a system against that being dissipated within it and dependent on the power being stored in it – an interplay between kinetic and potential energies.

Highlights of several of the case studies feature current renewable energy problems such as the future of electric power grid control, wind turbine load alleviation, and novel control designs for micro-grids that incorporate wind and sunlight as renewable energy sources. The sustainability of self-organizing systems are dealt with as advanced topics. Research scientists, practicing engineers, engineering students, and others with a background in engineering will be able to develop and apply this methodology to their particular problems.

Rush D. Robinett III gained his PhD from Texas A&M University in 1987 and has since worked at Sandia National Laboratories. In 2002 he was recruited by the Director as Deputy Director of the Energy and Transportation Security Center to oversee the "reinvention" of the SNL’s stagnated applied energy programs. He provides the "technical horsepower" behind new and reinvigorated programs in renewable energy supply and in energy security for the Department of Defense. He is the designer of the sustainability metric at the heart of the Center Vision and Strategic Plan. In early 2008 Doctor Robinett was nominated to participate in the Intergovernmental Panel on Climate Change scoping meeting on renewable energy sources and climate change and then, following acceptance of its proposals to the IPCC plenary which he helped to write, he is now helping to compose the IPCC report on renewable energy as lead author within the geothermal energy section. In December 2008, Doctor Robinett was invited (and has agreed) to serve on the United States Air Force Scientific Advisory Board (SAB) summer study on "Alternative Sources of Energy for USAF bases". During his previous appointment, from 1996–2002 as a Manager of Technical Staff, Doctor Robinett developed a strong research department in controls, optimisation, sensors and computer vision applied to advanced manufacturing, robotics and biomedical engineering (overseeing 28 staff members and 10 PhDs). This has since been split into two departments (Controls and Sensors) and has secured in excess of $20 million in research funding from various agencies in the past four year for a cross-disciplinary initiative "Engineering Collectives". He is at present working to expand this by conducting research and developing new business opportunities in decentralized, indigenous, sustainable energy infrastructures. The Engineering Collectives research and business organisation is coupled with a graduate program established by Doctor Robinett during time as an Adjunct Professor at New Mexico Institute of Mining and Technology between 2002 and 2006. David Wilson earned his PhD from the University of New Mexico in 2000 and having worked as an engineer wit the Rockwell International Space Division and Boeing Defense and Space Group. Since 2000 he has been a Chief Research and Design Analyst for WAYA Research Inc. and has held various posts at Sandia National Laboratories most recently between 2004 and 2007 as a Senior Member of the Technical Staff working in energy infrastructure analysis and exergy/entropy control design methodologies which work continued in his present position as Principal Member of the Technical Staff together with new work on active load alleviation control system development in the Wind Energy Department and the development of nonlinear control design methods for general nonlinear systems.