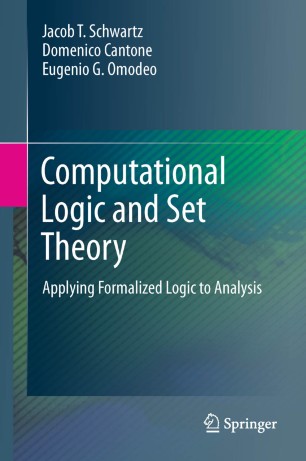 As computer software becomes more complex, the question of how its correctness can be assured grows ever more critical. Formal logic embodied in computer programs is an important part of the answer to this problem.

This must-read text presents the pioneering work of the late Professor Jacob (Jack) T. Schwartz on computational logic and set theory and its application to proof verification techniques, culminating in the ÆtnaNova system, a prototype computer program designed to verify the correctness of mathematical proofs presented in the language of set theory. Taking a systematic approach, the book begins with a survey of traditional branches of logic before describing in detail the underlying design of the ÆtnaNova system. Major classical results on undecidability and unsolvability are then recast for this system. Readers do not require great knowledge of formal logic in order to follow the text, but a good understanding of standard programming techniques, and a familiarity with mathematical definitions and proofs reflecting the usual levels of rigor is assumed.

This ground-breaking work is essential reading for researchers and advanced graduates of computer science.