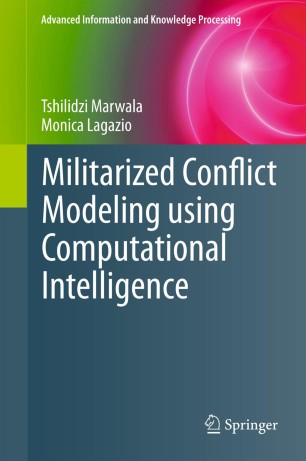 Militarized interstate disputes (MIDs) are defined as a set of interactions between, or among, states that can result in the display, threat or actual use of military force in an explicit way. These interactions can result in either peace or conflict. This book models the relationship between key variables and the risk of conflict between two countries. The variables include Allies which measures the presence or absence of military alliance, Contiguity which measures whether the countries share a common boundary or not and Major Power which measures whether either or both states are a major power.

Militarized Conflict Modeling Using Computational Intelligence implements various multi-layer perception neural networks, Bayesian networks, support vector machines, neuro-fuzzy models, rough sets models, neuro-rough sets models and optimized rough sets models to create models that estimate the risk of conflict given the variables. Secondly, these models are used to study the sensitivity of each variable to conflict. Furthermore, a framework on how these models can be used to control the possibility of peace is proposed. Finally, new and emerging topics on modelling conflict are identified and further work is proposed.