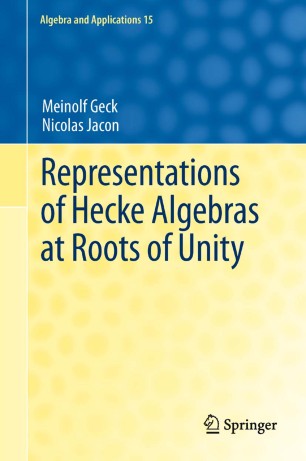 Representations of Hecke Algebras at Roots of Unity

Part of the Algebra and Applications book series (AA, volume 15)

Presenting a systematic and unified treatment of representations of Hecke algebras at roots of unity, this book is unique in its approach and includes new results that have not yet been published in book form. It also serves as background reading to further active areas of current research such as the theory of affine Hecke algebras and Cherednik algebras.

The main results of this book are obtained by an interaction of several branches of mathematics, namely the theory of Fock spaces for quantum affine Lie algebras and Ariki's theorem, the combinatorics of crystal bases, the theory of Kazhdan-Lusztig bases and cells, and computational methods.

This book will be of use to researchers and graduate students in representation theory as well as any researchers outside of the field with an interest in Hecke algebras.

“This book unifies and summaries some of the work, mostly done during the last ten years, on representations of Iwahori-Hecke algebras of finite Coxeter groups. … The book is very nicely written, striking the ideal balance between providing a uniform treatment of the finite Coxeter groups on the one hand, and presenting type-specific material on the other. … In summary, this book is excellent. It will serve primarily as a reference for experts, but would also work well for self-study for a graduate student.” (Matthew Fayers, Zentralblatt MATH, Vol. 1232, 2012)