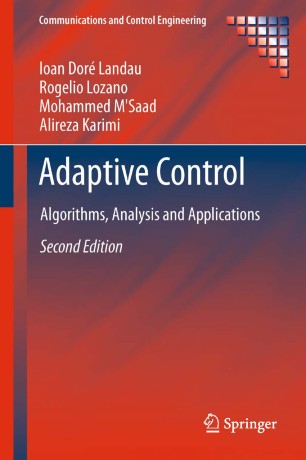 Adaptive Control (second edition) shows how a desired level of system performance can be maintained automatically and in real time, even when process or disturbance parameters are unknown and variable. It is a coherent exposition of the many aspects of this field, setting out the problems to be addressed and moving on to solutions, their practical significance and their application. Discrete-time aspects of adaptive control are emphasized to reflect the importance of digital computers in the application of the ideas presented.

The second edition is thoroughly revised to throw light on recent developments in theory and applications with new chapters on:

·         direct and indirect adaptive regulation; and

Many algorithms are newly presented in MATLAB® m-file format to facilitate their employment in real systems. Classroom-tested slides for instructors to use in teaching this material are also now provided. All of this supplementary electronic material can be downloaded from www.springer.com/978-0-85729-663-4.

The core material is also up-dated and re-edited to keep its perspective in line with modern ideas and more closely to associate algorithms with their applications giving the reader a  solid grounding in:

Control researchers and applied mathematicians will find Adaptive Control of significant and enduring interest and its use of example and application will appeal to practitioners working with unknown- and variable-parameter plant.

Ioan Doré Landau is Research Director (Emeritus) at C.N.R.S.(National Centre for Scientific Research) and works at the Laboratoire d'Automatique de Grenoble (CNRS/INPG) of the Institut National Polytechnique de Grenoble. His research interests encompass theory and applications in system identification, adaptive control, robust digital control and nonlinear systems. He has authored and co-authored over 200 papers on these subjects. He is the author of the books: Adaptive Control: The Model Reference Approach (Dekker 1979) and translated into Chinese, System Identification and Control Design (Hermès 1993, Prentice Hall 1990). and co-author of the books (with M. Tomizuka) Adaptive Control: Theory and Practice (in Japanese - Ohm 1981) and (with G. Zito) Digital Control Systems (Springer Verlag 2005). He edited and co-edited several books in French on the above topics including a series on “Mathematical Tools for Control, System Analysis and Signal Processing and Models” and one on “Adaptive Control”. He holds several patents and was at the origin of several software packages in control developed by ADAPTECH. He has advised 29 PhD students. He delivered a number of Plenary Talks at International Conferences including American Control Conference in Seattle in 1995. He was the key note speaker at the European Control Conference in Bruxelles in 1997. Dr. Landau received the Rufus Oldenburger Medal 2000 from the American Society of Mechanical Engineering in recognition of significant contributions to the field of automatic control for his pioneering contributions in adaptive control and system identification. He was an R. Springer Professor at University of .California. (Berkeley) Department of Mechanical Engineering in 1992. He received the pris Monpetit from the French Academy of Science in 1991, the “Best Review Paper Award (1981-84)” for his paper on adaptive control published in ASME Journal of Dynamical Systems Measurement and Control, the C.N.R.S. Silver Medal in 1982 and the Great Gold Medal at the Invention Exhibition Vienna in 1968 for his patent on the variable frequency control of asynchronous motors. He received the degree of Docteur-des-Sciences Physiques from the University of Grenoble. Before joining the C.N.R.S. in 1976 as research director, he was an Associate Professor at the Institut National Polytechnique de Grenoble from 1973 to 1976, a Senior Post-doctoral Research Associate at NASA - Ames Research Center in 1971-72 and a research engineer at ALSTHOM in 1969-71 and 72-73. At C.N.R.S. he launched several coordinated programs in the field of Control which contributed to the emergence and development of the French control community. He was the Director of the co-ordinated research programs: “Mathematical Tools and Models for Control, System Analysis and Signal Processing” from 1979 to 1982, “Adaptive Systems in Control and Signal Processing” from 1984 to 1988 and “Automatique” from 1988 to 1996. He was also Director of the Laboratoire d'Automatique de Grenoble from 1987 to 1990. Dr. Landau was the General Chairman of the first European Control Conference organised in Grenoble in 1991. He was one of the founders and the first President of the European Community Control Association (ECCA) from 1991 to 1993 (now EUCA) and he was Editor in Chief of the European Journal of Control (a publication of the European Union Control Association) from 1994 to the end of 2002. In June 1998 the CNRS organized an international colloquium in his honor “Perspectives in Control - Theory and Applications”. The proceedings of the colloquium (Normand-Cyrot, Ed., Perspectives in Control 978-1-85233-042-2) were published by Springer.

“This book is intended as a textbook for graduate students, and a basic reference for control researchers, applied mathematicians and practicing engineers. It has a clear and coherent exposition, showing the themes addressed and providing solutions to these, highlighting its relevance and possible applications.” (Guillermo Fernández-Anaya, Mathematical Reviews, February, 2015)

“The aim of this book is to provide a coherent and comprehensive treatment of the field of adaptive control. Throughout the book, the mathematical aspects of the synthesis and analysis of various algorithms are emphasized. The book contains various applications of control techniques. The book is intended as a textbook for graduate students as well as basic reference for practicing engineers facing the problem of designing adaptive control systems.” (Vjatscheslav Vasiliev, Zentralblatt MATH, Vol. 1234, 2012)