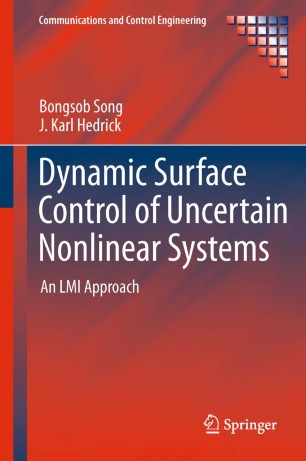 Dynamic Surface Control of Uncertain Nonlinear Systems provides a theoretically rigorous and practical introduction to nonlinear control design. The convex optimization approach applied to good effect in linear systems is extended to the nonlinear case using the new dynamic surface control (DSC) algorithm developed by the authors. A variety of problems – DSC design, output feedback, input saturation and fault-tolerant control among them – are considered. The inclusion of applications material demonstrates the real significance of the DSC algorithm, which is robust and easy to use, for nonlinear systems with uncertainty in automotive and robotics.

Written for the researcher and graduate student of nonlinear control theory, this book will provide the applied mathematician and engineer alike with a set of powerful tools for nonlinear control design. It will also be of interest to practitioners working with a mechatronic systems in aerospace, manufacturing and automotive and robotics, milieux.

Bongsob Song is currently an associate professor of Mechanical Engineering, Ajou University, Korea. His research interests include nonlinear control theory, fault tolerant control, and optimization with the application of automotive control. He is currently the Director of Automatic Control Laboratory at Ajou University and has been awarded many research grants for his automotive control group. He has served as a referee for industiral and academic research projects on vehicle control and active safety vehicle in Korea. J. Karl Hedrick is currently the James Marshall Wells Professor of Mechanical Engineering at the University of California at Berkeley, USA. His research focuses on the application of advanced control theory to a wide variety of vehicle dynamic systems including automotive, aircraft and ocean vehicles. He is currently the Director of Berkeley’s Vehicle Dynamics Laboratory as well as the PI of the Office of Naval Research center at Berkeley, the Center for the Collaborative Control of Unmanned Vehicles. Before coming to Berkeley he was a Professor of Mechanical Engineering at MIT from 1974-1988. He is was the chairman of the International Association of Vehicle System Dynamics (IAVSD) 20th Symposium, held in August of 2007 and was the editor of the Vehicle Systems Dynamics Journal. He is a Fellow of ASME where he has served as Chairman of the Dynamic Systems and Controls Division and as Chairman of the Honors Committee. He is also a member of SAE and AIAA. He has been awarded a number of honors including, ASME, Dynamic Systems and Control Division’s Outstanding Investigator Award, 2000, ASME, DSM&C Journal’s Best Paper Award (1983&2001), IEEE Transactions on Control Systems and Technology’s Outstanding Paper Award (1998), and the American Automatic Control Council’s O. Hugo Schuck Best Paper Award (2003). He was awarded ASME’s 2006 Rufus Oldenburger Medal which recognizes significant contributions and outstanding achievements in the field of automatic control. In 2009 he delivered the Nyquist Lecture at the ASME 2009 DSCC. He is currently the Editor of the ASME Journal of Dynamic Systems, Measurement and Control.