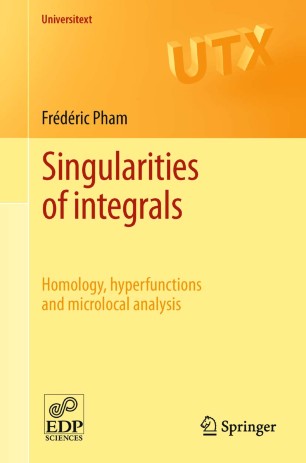 Bringing together two fundamental texts from Frédéric Pham’s research on singular integrals, the first part of this book focuses on topological and geometrical aspects while the second explains the analytic approach. Using notions developed by J. Leray in the calculus of residues in several variables and R. Thom’s isotopy theorems, Frédéric Pham’s foundational study of the singularities of integrals lies at the interface between analysis and algebraic geometry, culminating in the Picard-Lefschetz formulae. These mathematical structures, enriched by the work of Nilsson, are then approached using methods from the theory of differential equations and generalized from the point of view of hyperfunction theory and microlocal analysis.

Providing a ‘must-have’ introduction to the singularities of integrals, a number of supplementary references also offer a convenient guide to the subjects covered.

This book will appeal to both mathematicians and physicists with an interest in the area of singularities of integrals.

Frédéric Pham, now retired, was Professor at the University of Nice. He has published several educational and research texts. His recent work concerns semi-classical analysis and resurgent functions.

“The book under review is the author’s translation of his own recent monograph … . The book is written in a clear didactic style, almost all topics are illustrated by many examples together with nice pictures, non-formal remarks and comments; it can be recommended to graduate students as well as to mathematicians and physicists who are interested in the studies of singularities of integrals and applications.” (Aleksandr G. Aleksandrov, Zentralblatt MATH, Vol. 1223, 2011)

“Singularities of Integrals is a very valuable book in that it deals with serious and important material, and does so in a way accessible to some one wanting to get into the field … . the target student should really have at least a solid advanced undergraduate background in topology and differential geometry … and a bit of sheaf theory and hard analysis, to boot. Modulo these prerequisites it’s all good stuff.” (Michael Berg, The Mathematical Association of America, July, 2011)