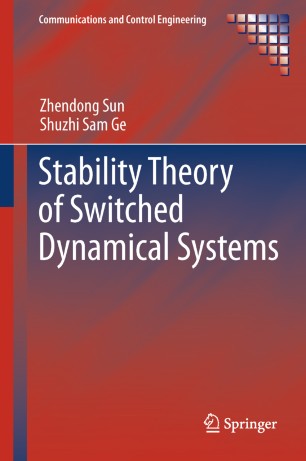 Stability issues are fundamental in the study of the many complex nonlinear dynamic behaviours within switched systems. Professors Sun and Ge present a thorough investigation of stability effects on three broad classes of switching mechanism:

• constrained switching, including random (within a known stochastic distribution), dwell-time (with a known minimum duration for each subsystem) and autonomously-generated (with a pre-assigned mechanism) switching; and

For each of these classes Stability Theory for Switched Dynamical Systems propounds:

• connections to other well-known control problems; and

• many motivating and illustrative examples.

Academic researchers and engineers interested in systems and control will find this book of great value in dealing with all forms of switching and it will be a useful source of complementary reading for graduate students of nonlinear systems theory.

Dr. Sun's current research interests are in the fields of nonlinear control systems, switched and hybrid systems, and sampled-data systems. He is author of the book Switched Linear Systems (Springer, 2005). He was the recipient of the Guan Zhao-Zhi Award at the Chinese Control Conference (HongKong, China) in 2000. He was nominated as an Outstanding Reviewer for Automatica in 2004. Since 2004, he has been an Associate Editor on the Conference Editorial Board of the IEEE Control Systems Society. He is currently supported by the New Century Talents’ Program of the Ministry of Education of China. He is a senior member of the IEEE.

Shuzhi Sam Ge is the Director of Social Robotics Lab of Interactive Digital Media Institute, and a Professor of the Department of Electrical and Computer Engineering at the National University of Singapore.

Dr Ge was the recipient of the 1999 National Technology Award, 2001 University Young Research Award, 2002 Temasek Young Investigator Award, Singapore, and the 2004 Outstanding Overseas Young Researcher Award from the Chinese National Science Foundation. He was elected to the Fellowship of the IEEE in 2006.

He has (co)-authored three books: Adaptive Neural Network Control of Robotic Manipulators (World Scientific, 1998), Stable Adaptive Neural Network Control (Kluwer, 2001) and Switched Linear Systems (Springer, 2005); and edited one: Autonomous Mobile Robots (Taylor and Francis (CRC Press), 2006), and over 300 international journal and conference papers. He is/has been Associate Editor for a number of flagship journals including IEEE Transactions on Automatic Control, IEEE Transactions on Control Systems Technology, IEEE Transactions on Neural Networks, and Automatica. He is also one of the Series Editors (with Professor Frank Lewis of the University of Texas) of the Taylor & Francis (CRC Press) Automation and Control Engineering Series, and as an elected member of the Board of Governors of the IEEE Control Systems Society. His current research interests include social robotics, multimedia fusion, adaptive control, and intelligent systems.

“This book presents in a systematic manner different stability and stabilization results for continuous- and discrete-time switched systems under various switching mechanisms. … The book provides a state-of-the-art of the stability issues for switched dynamical systems. It can be of interest to researchers and automatic control engineers. Also, it can be used as a complementary reading for postgraduate students of the nonlinear systems theory.” (Mikhail I. Krastanov, zbMATH, Vol. 1298, 2014)