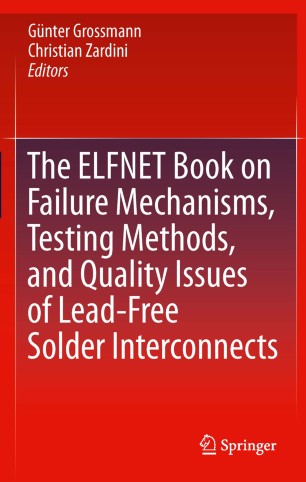 The ELFNET Book on Failure Mechanisms, Testing Methods, and Quality Issues of Lead-Free Solder Interconnects is the work of the European network ELFNET which was founded by the European Commission in the 6th Framework Programme. It brings together contributions from the leading European experts in lead-free soldering.

The limited validity of testing methods originating from tin-lead solder was a major point of concern in ELFNET members' discussions. As a result, the network's reliability group decided to bring together the material properties of lead-free solders, as well as the basics of material science, and to discuss their influence on the procedures for accelerated testing. This has led to a matrix of failure mechanisms and their activation and, as a result, to a comprehensive coverage of the scientific background and its applications in reliability testing of lead-free solder joints.

The ELFNET Book on Failure Mechanisms, Testing Methods, and Quality Issues of Lead-Free Solder Interconnects is written for scientists, engineers and researchers involved with lead-free electronics.

Günter Grossmann received his BE degree in Mechanical Engineering in 1981 from the University of Applied Sciences in Winterthur, Switzerland. After his studies, he was employed as Materials Engineer in various companies. From 1989 until 1998 he worked in the Reliability Laboratory of ETH Zurich in the fields of reliability of electronic assemblies, especially of soft solder joints, and in production processes of electronic equipment. In 1998, Günter Grossmann was a scientific guest of the University of Queensland in Brisbane, Australia. Since 1999, Günter Grossmann has worked at the Swiss Federal Laboratories for Materials Testing and Research (EMPA) as a researcher in the reliability of electronic assemblies and components, as co-lecturer at ETH in "Physics of Failure and Failure Analysis" and in failure analysis. For more than 10 years, Günter Grossmann is involved in production and reliability of lead-free solders.