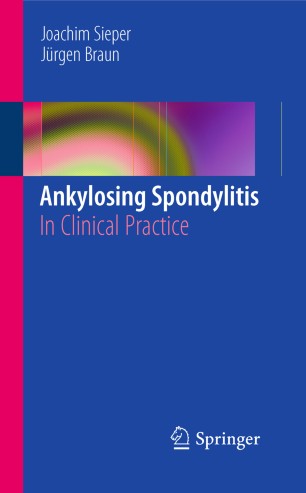 Ankylosing spondylitis is a chronic form of arthritis known to affect around 1 in 200 people (over 1 million sufferers in the USA alone). No cure has yet been found for the disease, however, early diagnosis and proper medical management can be important in reducing the risk of disability and deformity.

Ankylosing Spondylitis in Clinical Practice is a concise, practical guide on the diagnosis and management of this debilitating condition. The chapters cover all relevant issues including:

Joachim Sieper, MD is Consultant and Head of Rheumatology at the Charité University Hospital, Campus Benjamin Franklin, Berlin, Germany. A prolific researcher and writer, he has been an investigator since 1989 and a principal investigator since 1993 on several placebo-controlled randomized trials, which have been published internationally. He has authored an contributed to over 300 journal papers. Jürgan Braun, MD is Medical Director of the Rheumatology Medical Centre, Ruhrgebiet in Herne, Germany and is a lecturer at the Ruhr University in Bochum, Germany. He is also an honorary Professor in Rheumatology at the Charité Medical School in Berlin, Germany. He has been the recipient of several prestigious awards including the Ankylosing Spondylitis Patients Association Award in 1996, the Tosse-Research Award in Pediatric Rheumatology in 1998, the Carol Nachman Research Award in 2000 and the EULAR prize in 2003.

“This is a concise guidebook for diagnosing, managing, and treating patients with ankylosing spondylitis. … It is pocket sized and really can be a day-to-day reference for the learning clinician. … this book is a great guide for training internists or rheumatologists who have modest experience with these patients. … seasoned rheumatologists will appreciate the attempt to explain new classification systems, diagnostic criteria, and treatment options which have changed significantly over the past decade. … This is a great book (an easy read) … .” (Lesley M. Davila, Doody’s Review Service, February, 2011)
Buy options