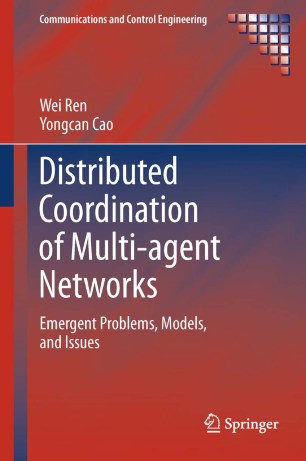 Multi-agent systems have numerous civilian, homeland security, and military applications; however, for all these applications, communication bandwidth, sensing range, power constraints, and stealth requirements preclude centralized command and control. The alternative is distributed coordination, which is more promising in terms of scalability, robustness, and flexibility.

Distributed Coordination of Multi-agent Networks introduces problems, models, and issues such as collective periodic motion coordination, collective tracking with a dynamic leader, and containment control with multiple leaders, and explores ideas for their solution. Solving these problems extends the existing application domains of multi-agent networks; for example, collective periodic motion coordination is appropriate for applications involving repetitive movements, collective tracking guarantees tracking of a dynamic leader by multiple followers in the presence of reduced interaction and partial measurements, and containment control enables maneuvering of multiple followers by multiple leaders.

The authors’ models for distributed coordination arise from physical constraints and the complex environments in which multi-agent systems operate; they include Lagrangian models – more realistic for mechanical-systems modeling than point models – and fractional-order systems which better represent the consequences of environmental complexity.

Other issues addressed in the text include the time delays inherent in networked systems, optimality concerns associated with the deisgn of energy-efficent algorithms, and the use of sampled-data settings in systems with intermittent neightbor-neighbor contact. Researchers, graduate students, and engineers interested in the field of multi-agent systems will find this monograph useful in introducing them to presently emerging research directions and problems in distributed coordination of multi-agent networks.

Wei Ren received the B.S. degree in electrical engineering from Hohai University, China, in 1997, the M.S. degree in mechatronics from Tongji University, China, in 2000, and the Ph.D. degree in electrical engineering from Brigham Young University, Provo, UT, in 2004. From October 2004 to July 2005, he was a Postdoctoral Research Associate with the Department of Aerospace Engineering, University of Maryland, College Park. Since August 2005, he has been with the Department of Electrical and Computer Engineering, Utah State University, Logan, where he is currently an Associate Professor. He is an author of the book Distributed Consensus in Multi-Vehicle Cooperative Control (Springer-Verlag, 2008). His research focuses on distributed control of multi-agent systems, networked cyber-physical systems, and autonomous control of unmanned vehicles. Dr. Ren was a recipient of the National Science Foundation CAREER Award in 2008. He is currently an Associate Editor for Systems and Control Letters and an Associate Editor on the IEEE Control Systems Society Conference Editorial Board.

“Some of the essential features of the book: a) an excellent résumé of the mathematical results used in the book (with exact references to the sources); b) at the end of each chapter, there are Notes guiding the reader to further studies and giving the sources of the presented material; c) inclusion of many numerical examples and simulations; d) the presence of the sampled data setting which links the analog to the digital approach … . represents an excellent exposition of the area of DCMaN.” (Dumitru Stanomir, Zentralblatt MATH, Vol. 1225, 2012)